The Hole in the Wall 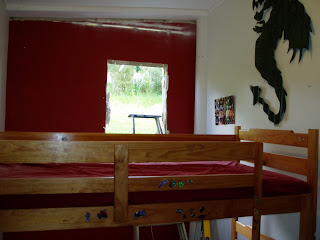 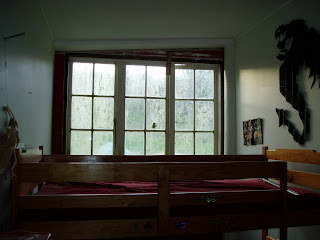 A before (well, actually a part-way-through) and after shot of my son's bedroom wall.

Now that we have walled off the bathroom from the laundry, it is windowless and very dark.  We needed a small window for the bathroom but I couldn't find one at the closest demolition yard.  And I didn't fancy an hours drive on the off chance another yard would have one.  Plus I have always wanted a larger window in my boy's room.  It is small and was pretty dark too.  I also worried about his ability to get out of it in a fire.

Solution:  Bribe son with monetary amount to take away his window that he suddenly grew VERY attached to.  Rip a gaping great hole in son's bedroom wall.  Spray dust and plasterboard EVERYWHERE.  Replace small window with disgustingly dirty window that was hiding behind shed.  Ooo and ahhh at the amazing difference in light.  Thank the builder who worked like stink to get it all done in one day so that it is reasonably water tight.  Phew!

I need to show you a little sneak preview of the quilt I'm quilting for my niece-yet-to-arrive.  Just to prove that I've stopped procrastinating! 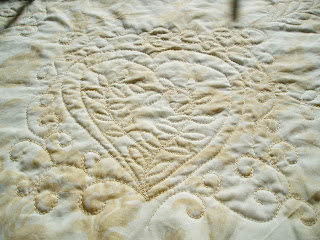 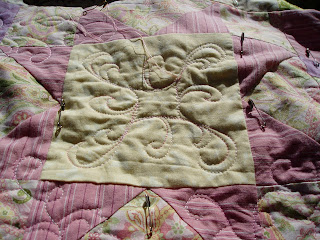 So no crab apple jelly making today, just lots of quilting.  Tonight I think I might find something to watch on TV (I don't usually indulge in watching the box) and tie in some pesky thread ends.  Then I have only about a fifth left to quilt.  Phew to that too!
Posted by Charlotte Scott at 7:03 PM 7 comments: 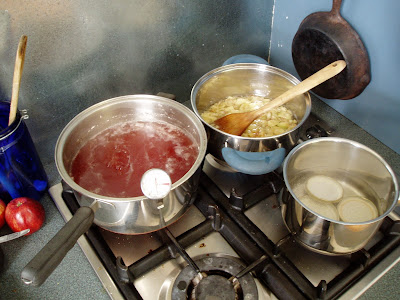 This is the form my procrastination is taking today.  I've bottled three jars of crab apple jelly after letting it drip overnight, I've bottled a mix of apples, nashi pears, normal pears and feijoas, my daughter and I have planted 50 daffodil bulbs in the orchard, and I've done some washing and dishwashing and a little blog hopping.

Last night I got my deadline quilt basted so that's a least one step done.  Now I could procrastinate some more by cleaning my stove top ('cause I just noticed how grubby it is in the photo above), but that's really scraping the bottom of the barrel when it comes to procrastination!  So off I go and hopefully I'll have it at least half quilted by tonight.

Hope you're having a great Sunday!
Posted by Charlotte Scott at 1:20 PM 3 comments:

I have a deadline.  It is self-imposed but important and I am procrastinating.  But procrastinating in the best way possible, by starting a new quilt! 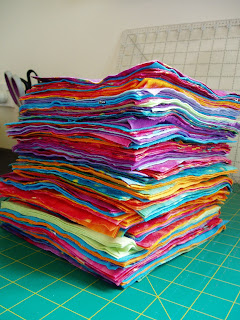 I'm going to make one of those raggy flannel quilts where the seam allowance is a design feature that frays and softens over time.  It will be for the kids to snuggle under when they are watching TV on cold winter weekend mornings when I'm still in bed!

I've been tidying my fabric stash (more procrastination!) and I've got a stack of flannels that I've never really used.  They are bulky and so I want to get rid of them.  I'm going to start using them more as backings for the bassinet quilts I make for the local maternity unit as well and hopefully that will be another box empty.

Now the dishwasher's going, the kids are in bed, I've written a blog post, caught up on all my emails, made a cup of tea, I can't really procrastinate anymore.......
Posted by Charlotte Scott at 8:50 PM 5 comments:

It's Good Friday today, the first day of the Easter school holidays.  So I've got two weeks with my little darlings.  And that would be two weeks on my own, as Hubby is heading off to Fiordland hunting Wapiti (Elk).  However, my Sister-in-Law and three nieces are coming up for a while to drive us crazy keep us entertained, so life will not be too boring!

Today we've seen the first sun for ages.  It's been raining and raining and raining.  So we've made the most of it and been outside for long walks and the kids have been jumping on the trampoline lots.  I got a chance to rummage around under our passionfruit vine and found loads!  This is probably the fourth amount like this we've collected.  It's fantastic, because the kidlets adore them and will eat plateloads.  I can also give some away - they are pretty popular and they are soooo expensive in the supermarkets.  I'm sure I saw them priced at about $20 per kilo, gulp. 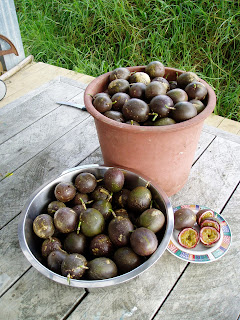 I've also managed to fit in a spot of quilting.  I'm working on quilting my Old Maid's Puzzle quilt and now that I've set my space up for machine quilting, I want to keep at it so I don't have to keep rearranging the furniture.  I also need to get it quilted as I need the basting pins!  I've finished a top I can't show you (don't you hate that - but the niece who it's for isn't quite here yet, and I don't want to spoil the surprise for her parents) and I need to get it finished so I can take it with me when I visit Australia in a couple weeks.  Yes, I'm off to Brisbane soon, but more on that later. 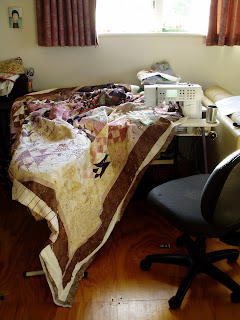 Meanwhile, the building work on my studio continues.  The dividing wall between the laundry and the studio space has been taken out and a new wall created to wall off the bathroom.  There will be a french door where the big window is in the back wall, but that is yet to happen.  The doors and windows are in on the front wall and the ceiling beams are now done.  And I think I've got the coolest front door around!  It's like a stable door, we just have to put in a catch so that it moves in one piece for most of the time, and it needs a proper handle fitted.

Hopefully my next studio update will show a ceiling.  But in the meantime have a happy and safe Easter everyone.
Posted by Charlotte Scott at 5:49 PM 6 comments: