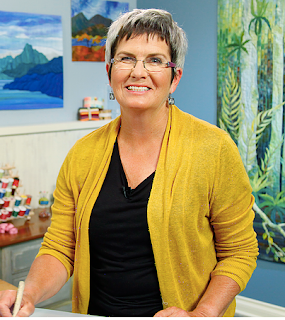 Gloria Loughman is a quilt artist who lives in Victoria, Australia.  She began patchwork about 30 years ago during recovery from chemotherapy for breast cancer.  Gloria studied for a Diploma in Art in 1996 and then began to make her large colour and light filled landscape quilts that she is most well known for.

Gloria has won many awards, including the Rajah teaching award in 2009, and the most prestigious Australian National award for her quilt ‘Kimberley Mystique’ in 2003.  Gloria is a trained secondary teacher and has taught her art quilting classes for many years.   She travels to teach extensively, with more than 20 countries under her belt. 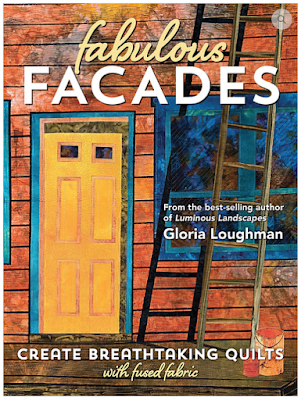 Gloria is also the author of four art quilting books (the most recent on architecture and house facades has just been released), she has a Craftsy class, has had many solo exhibitions and will be teaching at the NZ National Quilt Symposium in October.

We talk about Gloria's journey from learning to make traditional quilts through to being a full-time international art quilting teacher, artist and author.

Gloria paints and dyes and we talk about how she uses these fabrics in her quilt.  We talk about how she has evolved her style while keeping her voice and how her background in mathematics relates to her mosaic and patterned backgrounds.  And we learn about how important trying to capture light is to Gloria.

We chat about how important teaching is to Gloria and how much she enjoys seeing how students discover their potential in class.  And we also learn how Gloria fits in such a busy teaching schedule along with making her own work and spending time with family.

Gloria has a new class and I get to hear about her experimental work that has lead to a new technique.  The quilt above is one of the samples for this and this is a sneak preview as it's not up on her website yet.  Lucky us!

Here are some links to topics that we talked about:
The Ananse Village damask fabric that Gloria uses can be found here https://www.anansevillage.com
Howard Arkley is an artist that Gloria finds inspirational, along with Harold Coop and architect Harry Seidler.  Gloria also mentions Tom Thompson and The Group of Seven.   And Gloria cannot live without her (multiple) Sewezi Tables.

And this is where you can find more about Gloria and get in touch with her, including finding her teaching schedule:
https://www.glorialoughman.com/about


Thank you to everyone who supports this podcast and helps me tell the stories of our quiltmakers, artists and professionals.  If you would like to support me, head over to iTunes and leave a five star review, pop over to my podbean hosting site and leave a donation to help me produce the podcast, or consider advertising your business by sponsoring an episode.

Email me at theslightlymadquiltlady@gmail.com  Cheers! 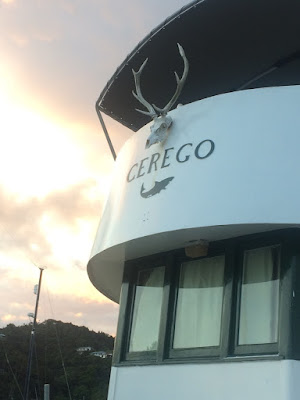 So do you want to know what it's like to live on a boat?  Well, my boat in particular, because certainly there are boats and then there are boats.  And my boat is tied to a wharf most of the time, not floating in the wild sea or bobbing on a mooring.  It's not a sailing yacht or a super yacht, but it's home. 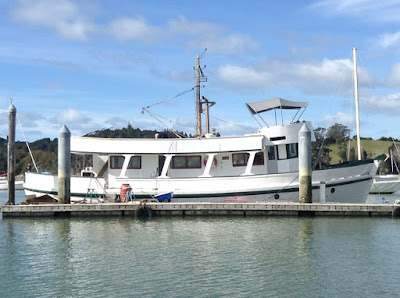 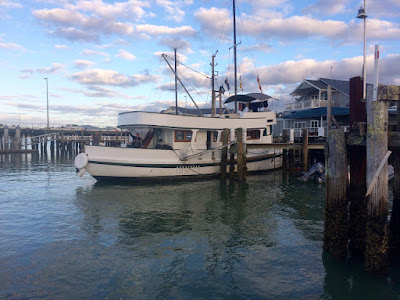 And it's cool fun to live here, and so different, I'm glad I gave it a chance.  But the kids are getting bigger.  My son is almost as tall as me and his feet have been bigger than mine for ages.  It's starting to feel a little cramped when four of us are trying to use the galley all at the same time.

I can see a time in the future when we will move off the boat and look back on our time here with fondness and nostalgia.  But for now, this is home.
Posted by Charlotte Scott at 10:22 AM 2 comments:

Shirley Mooney has been quilting and creating for more than twenty years.  She is adventurous, experimental and prolific – her personal motto (and name of her blog) being ‘don’t wait to create’! 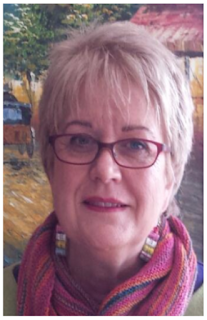 Shirley has a profound love of colour and texture and this is evident when you see her many quilts featuring fabric manipulation either with 3D piecing or fabric weaving, her innovative use of bold striped fabrics, or her eye-catching kaleidoscope blocks.

Not only a quilt maker, Shirley also knits, crochets, garment sews, felts and lately has taken up weaving.  She is also a well-known teacher and is constantly evolving new classes for her students – she is full of energy and loves to inspire and motivate.  Shirley believes there is a masterpiece inside everyone!

Shirley is part of the team at The Wellington Sewing Centre and we discuss how much Shirley loves her job working amongst yarn and fabric and how a professional development push from her boss, Jo, made her take a weaving class - which has now become a new passion!  Shirley gives us an insight into what's happening with craft in the community and how keen young people are to learn new skills - even macrame! 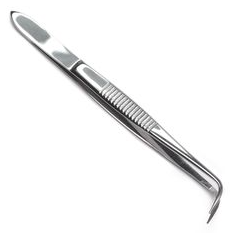 Thank you to everyone who supports this podcast and helps me tell the stories of our quiltmakers, artists and professionals.  If you would like to support me, head over to iTunes and leave a five star review, pop over to my podbean hosting site and leave a donation, or consider advertising your business by sponsoring an episode.  Email me at theslightlymadquiltlady@gmail.com  Cheers!

Posted by Charlotte Scott at 4:39 PM No comments:

The 100 Days Project is over for another year.  This year I had a big stretch where I was as the uggh stage of my project; the 'have to push through' stage.  There was also the 'this is awesome!' stage; the 'I didn't know I could do that' stage; the 'what the heck do I do today?' stage; and the 'I haven't done anything for ages so now I need to do three in one day' stage.

I started the 100 days project again this year after having a very satisfying experience with last year's.  I didn't get all my days done last year, but I felt like I had really achieved something personally with my art.  My theme had been 100 days of faces and I thought I might get to the stage where I was comfortable with drawing faces and using them in my quilts.  I did get really comfortable with faces and I felt I was even reaching a point where I could narrow in on my style - I felt this was a pretty big accomplishment. 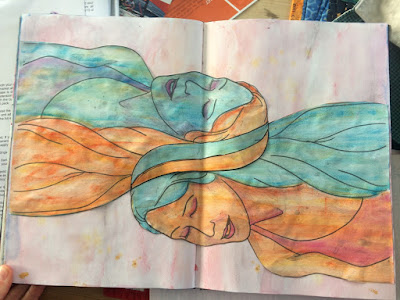 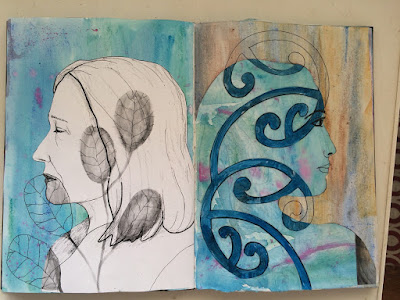 So this year I was really excited to get going on another 100.  I chose 100 days of scissors, wanting to see if I could find my voice with free hand paper cutting, with the hope that I could transfer this to my fabric cutting later. 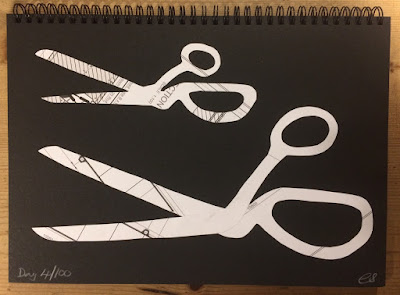 And I have had several stretches of days where I've really thought I had cracked something.  There was a stretch when I was doing branches, I loved almost every one of them, but then I felt I couldn't keep going with them because I thought I'd exhaust myself with them on paper without ever getting them into fabric.  Was that a legitimate worry? 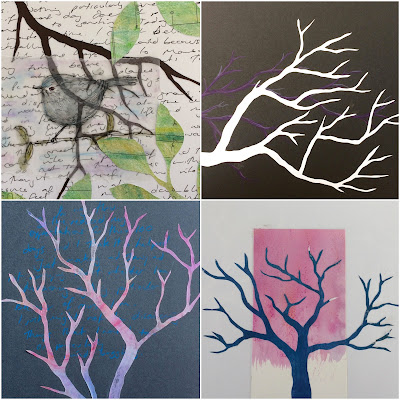 I spent a span of days trying to find a symbol that worked for me.  That was after seeing Dinner at Eight artists share their work that was accepted for a themed show 'Personal Iconography: Graffiti on Cloth', and wondering if I had any particular personal symbols that I could incorporate into more of my work.  Turns out I don't think I do... 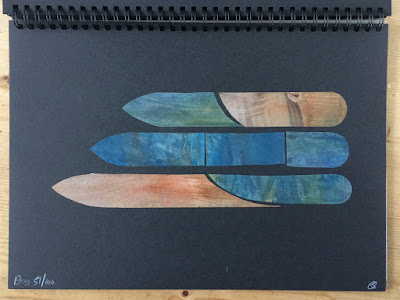 So I pushed through and just kept turning up, because that is what it's all about.  Turn up, do the work, form the habits, see what happens.  Sometimes I'd cheat though, and I'd do several days in one go, which helped me work in a kind of series with whatever subject I'd picked. 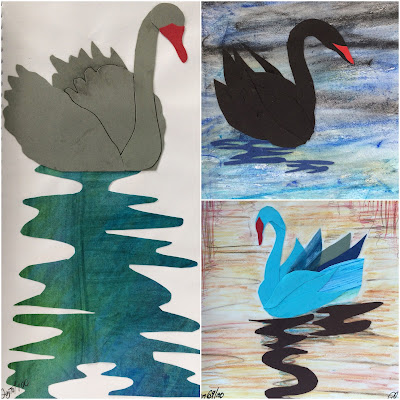 But mostly I just kept trudging on.  And now we have reached the end of the process.  I'll let you in on a little secret though: I haven't done day 100.... I bought two sketchbooks in the beginning - a black one with 40 pages and a white one with 60.  I must have ripped out a page, or the manufacturers were telling fibs because at day 99 I ran out of pages!  Somehow I just can't bring myself to work on any other surface!

Overall it doesn't feel quite as satisfying as last year - the experience was positive, there are pieces of work that I like and that I want to explore more, but I guess I just don't feel like I reached the same stage as I did last year.

But that's ok, I'll be back for next year's 100 days, because the process teaches you so much, even if you don't reach the creative levels you hoped for.  And now, looking at the photographs of all the work laid out end to end, I'm proud of myself.  That's a good feeling.  I'll be back for a second helping next year. 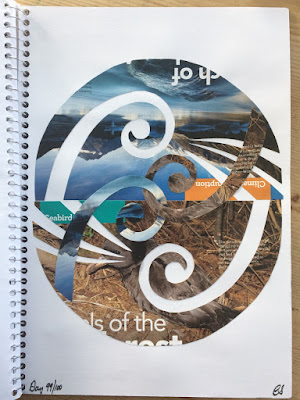 And here's the whole project in lots of 20 (you don't see the whole pictures, just thumbnails, and sometimes oddly cropped): 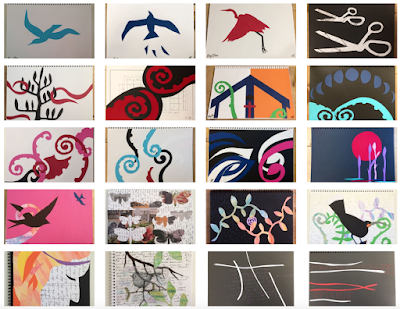 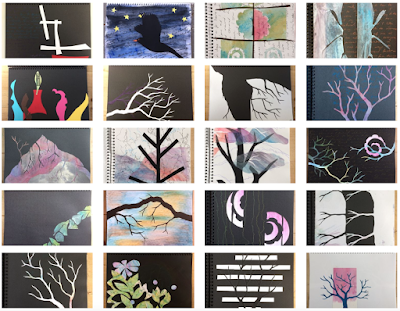 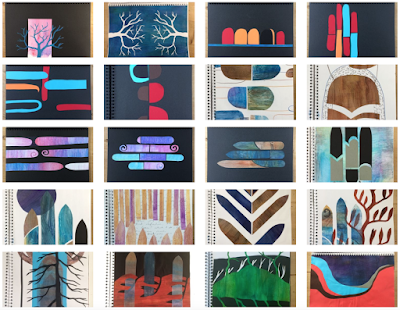 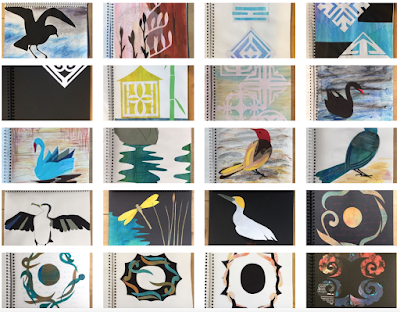 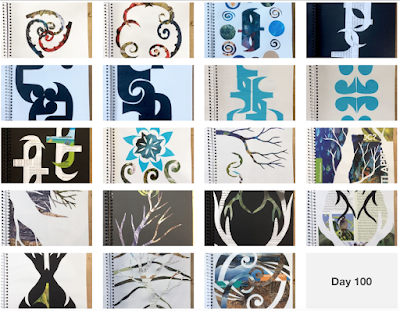