This weekend is the Whangarei Quilting exhibition.  A few months ago they asked me if I'd like to be the judge for their challenge and a guest exhibitor and demonstrator.  I was pretty chuffed and said yes, not knowing how hard judging the wonderful challenge quilts was going to be! 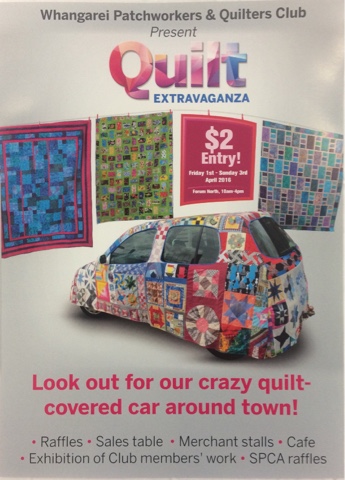 But it's all done now (after much thought and many cups of tea)
and the opening function is tonight when I get to announce the winners.
I'll be demonstrating tomorrow (Friday) and a selection of my quilts will be hanging all weekend.  I've taken my hand dyed silk organza and am demonstrating how to use it to make a piece of textile art for the wall. 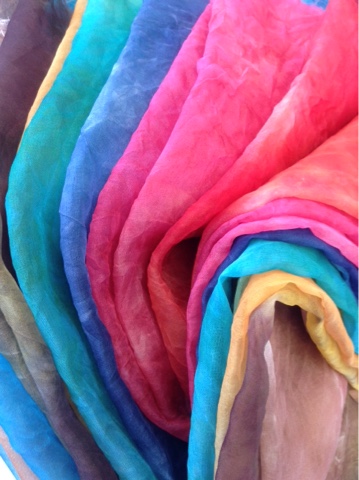 I'd love to see you if you're in the area.  It promises to be a great show, plenty of quilts, great merchants, a wonderful sales table and lots of great raffles.
Posted by Charlotte Scott at 8:11 PM 1 comment:

Podcast - Interview with Wendy Welsh from Wendy's Quilts and More

I first found Wendy, a New Zealand quilter, through the wonderful pictorial world of Instagram.  Wendy loves colour, loves handwork of all kinds and loves sharing her work with the rest of the world. 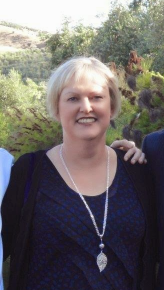 I was intrigued with Wendy's millefiori la passacaglia quilt and I contacted her to ask for an interview.  She graciously obliged and we had a good old chat about quilting, colour, hand-piecing and social media. 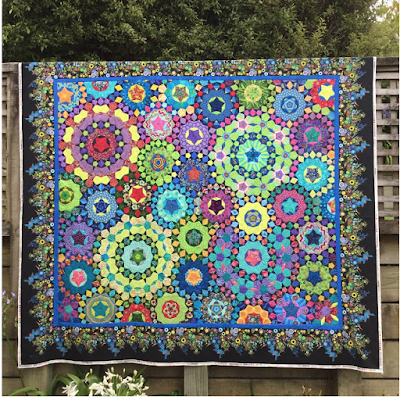 There is lots of good listening in this interview and I hope you enjoy listening as much as I did talking to Wendy. 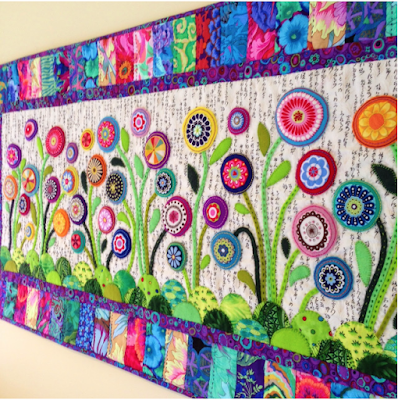 All pictures are courtesy of Wendy Welsh, please don't use without her permission. 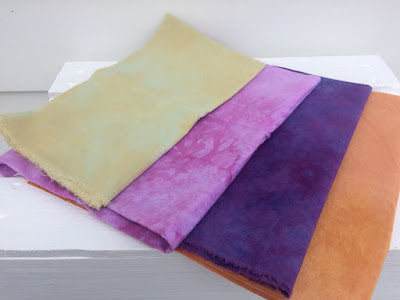 What I observe sometimes when other quilters are putting together colour palettes, is that they don't play around with proportions.  They stack a beautifully folded pile of fabrics together and look at it.  But rarely do you use equal amounts of fabric in a quilt.  So change the way you fold them and look at how the colours work together when there are different amounts of each. 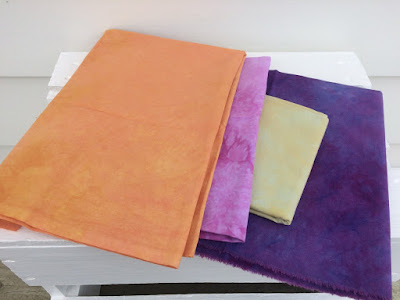 Then I sometimes use this internet tool to check how the different proportions might look in actual pictures.  It's called TinEye Labs Multicolr Search Lab, and it searches Flikr creative commons images for photographs that match your chosen colours and proportions thereof.

Below is the search I did based on the proportions of colour in the above mix.  Whoa! Look at all that orange, and I can now see that the orange is about the same tonal value as the pink, so there is less tonal contrast than I might like. (Click on the image and that should biggify it if you need a closer look.) 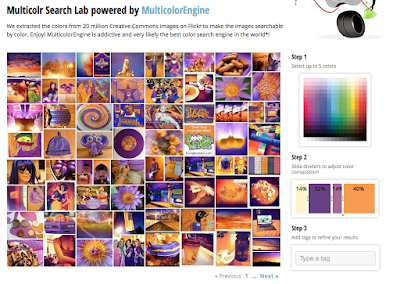 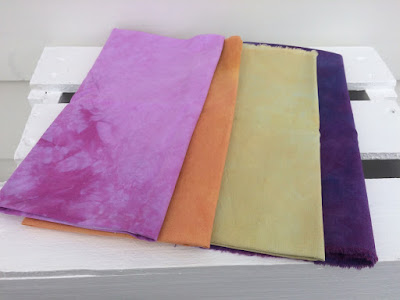 The photo above and the search results based on proportions below.  This reminds me of sunsets and I like the large proportion of light - some nice contrasts. 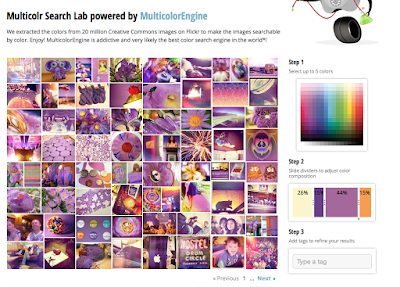 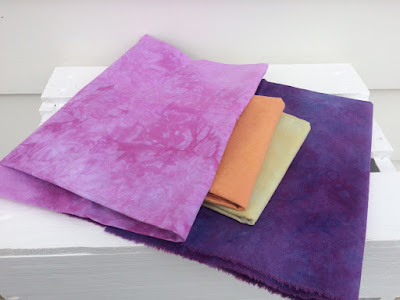 Above is the photo, and below is the search with the roundabout proportions.  Lots of pinky purple coming through here.  More restful perhaps?  And once again, less tonal contrasts. 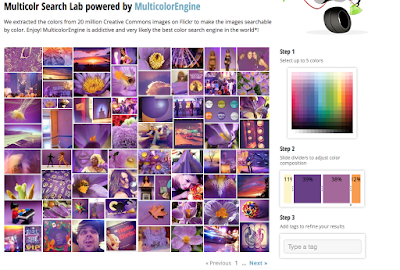 And below is the search I did with equal colour proportions.  I find it a bit messy, or perhaps busy is a better word, no focal colour that draws me in. 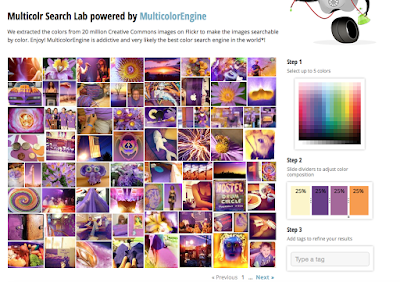 So how do you play around with your colour palettes?  Do you rearrange your stacks to get an idea of how fabrics play with others in your chosen scheme?  And do you rearrange proportions to see what different looks you can get?

Posted by Charlotte Scott at 9:17 AM 4 comments: 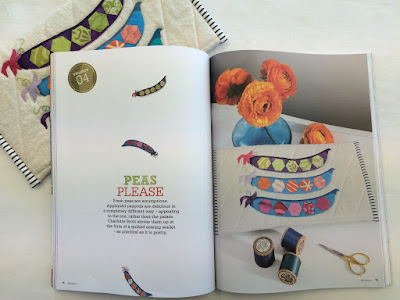 It's such a thrill to open a lovely magazine and see your own work!  I had a little pattern published in the February edition of Homespun Magazine, an Australian publication that has a focus on craft stitching. 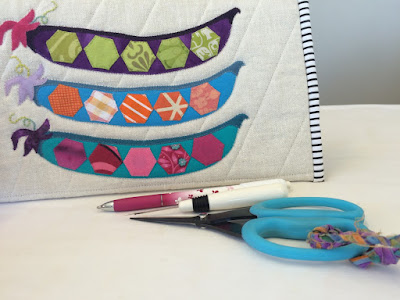 This is a little sewing wallet that features hexagon peas on brightly coloured appliquéd pea-pods.  I even did a quick bit of embroidery to stitch the tendrils. 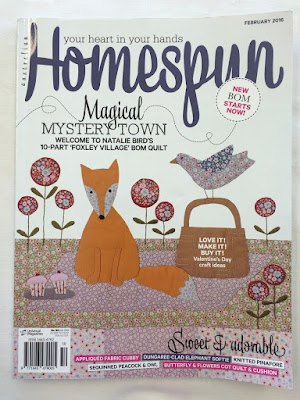 I enjoy Homespun.  It's interesting and inspiring to see a range of projects, not just quilting, which I'm obviously obsessed with enough.  No need to feed that particular passion!  I like the sections they have interviewing their contributors too.  And bonus - they were lovely to work with as a contributor! 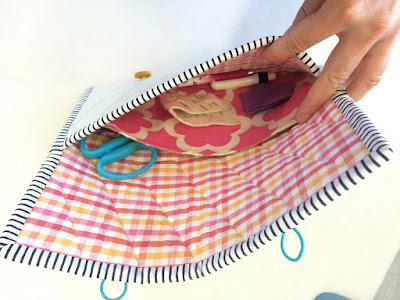 The magazine can only publish so many photographs of any particular project, so I thought I'd show you the inside of the wallet here.  I love the gingham that I used to line it and there is a little divider pocket to help keep things neat and tidy inside. 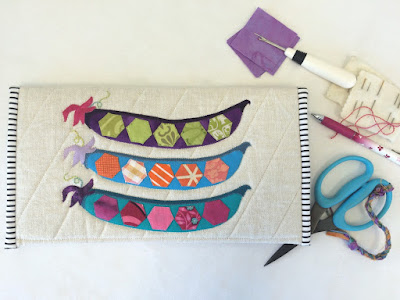 I used ByAnnie's Soft and Stable and I found it really easy to use and it gave a very nice hand to the wallet.  Firm but flexible, easy to quilt and nice and soft.  I'll be trying it again.

And I'm in love with this black and white striped fabric for bindings.  I only bought a metre.  I think I need some more.....

Posted by Charlotte Scott at 9:00 AM 5 comments:

Our quilting club holds a Christmas lunch as an end of year celebration.  (Yes, I do know it's March, it's just a reflection on how busy my brain has been lately!).  We paid a modest amount per head and booked a really lovely motel function room, ate good food and had a blast playing a few games. 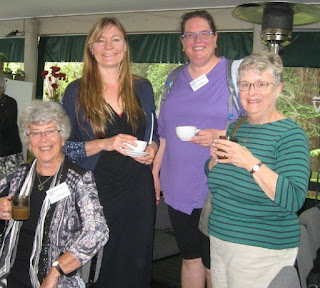 Here's a picture of a few of us enjoying ourselves - Joy, myself, Mathea and Mathea's MIL (who doesn't quilt, but had a lot of fun anyway).

I organised one of the games - and chose speed dating for quilters!  It was designed to get people talking to others they might not know that well and learn something new about those that they did know.

Each table had eight place settings, four on each side.  I had all the women sitting on the left hand sides of the table as the 'sitters', all the women on the right hand side were 'movers'.  The sitters were given a sheet of paper with sets of questions.  The sitter and mover would ask each other the three questions in a set, write the answers down on the sheet and when I rang a bell, the movers moved on to the next sitter and they asked each other the next set of questions.  I only gave the sitters the questions, but you could give everyone a sheet of paper with the questions - whatever works.

There were three questions in each set.  I tried to mix in a quilting related question in each set, but the other questions were pretty random and fun - like 'tea or coffee?', 'how old were you when you had your first kiss?' And 'if you could be an animal, what would you be?'

I ran the bell about every 90 seconds, but I probably should have given them 120 seconds, which would have given them a little more time for moving places.  And here is a tip, if you have participants who have mobility difficulties, get them sitting on the 'sitters' side of the table.  It was noisy, busy, a little chaotic and a lot of fun!

I've written out the questions in a google doc for you to use if you want to organise something similar for your club.  There are 14 sets of questions, which was enough for 28 participants.  If you had more, you'd have to either write more questions or not have everyone meet everyone else.

This would be a fun game to play at a retreat or any other function where you need introductions.  During the rest of the afternoon, I would periodically read out some of the answers and we had to guess who had written them.  It made for lots of laughs!

Here's the link for the google doc:  https://docs.google.com/document/d/1oow85bWgwnZLqQjx6JWeNHnJr6GJiBI3ALsTGxkKhco/edit?usp=sharing
Posted by Charlotte Scott at 8:18 PM 2 comments:

How to dispose of used sewing needles.

I'm a big advocate for frequent needle changes when you are using your sewing machine.  It comes from many years of experience - the first thing I do when I get skipped stitches or messy tension or something else weird, is change my needle.  And about eight times out of ten that fixes it.  So now I just change my needle more frequently and consequently I get less problems. 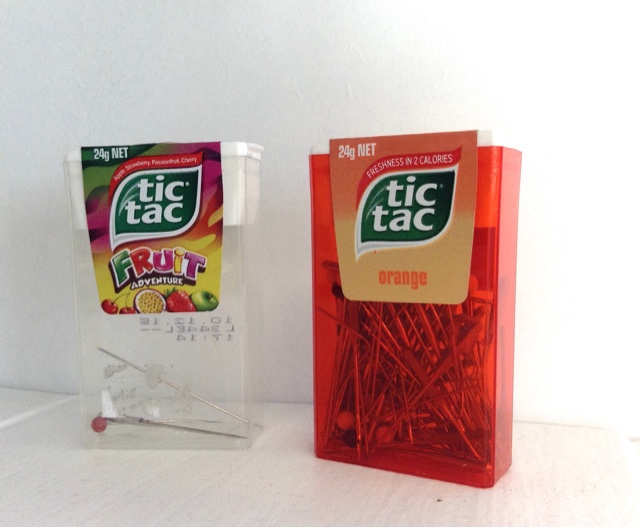 And here is my tip of the day: tic-tac containers are perfect for storing used needles, or broken needles, or bent and blunt pins.  They are small and flat so slip neatly into sewing kits; they fasten securely so are safe; and it's easy to see that they have pins in them so you don't get confused with your real tic-tacs!  Tape the opening shut when full and chuck them in the rubbish bin and you have a safe method of disposal.
And no, I'm receiving no payment for this post (although, if tic-tacs felt so inclined.....!)
Posted by Charlotte Scott at 11:03 AM 4 comments: