Lint is a fact of life.

I've just come back from a quick tour of New Zealand with the BERNINA team, launching the new Q16 sit-down longarm quilting machine. One of our frequent topics of discussion was lint and machine cleaning. 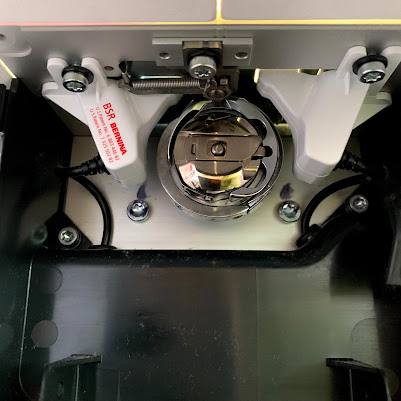 Before we would run a class or a demo for the dealers, we would clean and oil the machines, change the needles, load full bobbins, and test sew the machines. I took a photo of the inside of the bobbin area just after doing that. Looks beautiful, right? Those two big white things are the double BERNINA stitch regulators.
Something I've heard are comments like, "Gosh that thread is linty, I'm not going to use it." Or, "Yuck, that batting is so linty."
But lint is a fact of life! We are textile artists, we work with fibres, no matter what batting, what thread, what fabric we use, we are going to get lint! And yes, some are more linty than others, but that shouldn't stop us from using them if they are giving us the effect we want in our quilt. 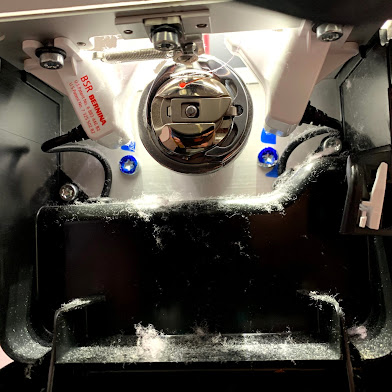 So here's a picture of the inside of the bobbin area after a three hour class. The stitch plate isn't on, that's why it's brighter. But check out the lint! And we were using good quality batting, fabrics and threads.

Lint is a fact of life! When you sew with fibres, especially on a high-speed machine, you are going to get lint. Your job isn't to try and find the least linty products to use, your job to clean your machine.

Make it part of your sewing routine. Sit down to sew, pop open your machine and give it a quick swipe with your lint brush. The more often you do it, the less time it will take. And while you are there, give it a drop of oil as per your instruction manual. You really should be giving it an oil every 4-8 hours of sewing time.

And I guess now is a good time to remind you to change your needle too. Every eight hours of sewing!

Your time is valuable, set yourself up for a good days sewing. You've spent plenty of money on your machine and on your fabrics, you've given up your valuable time to your project, so don't skimp on those couple of minutes it will take to clean and oil your machine so that you can have a well-running machine that will be a joy to sew with.

Posted by Charlotte Scott at 1:14 PM