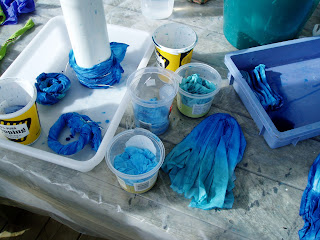 I've been using up the left over dye from yesterday.  Three cups of made up dye solution goes a loooong way! 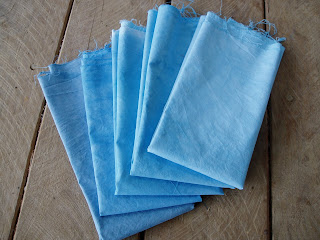 These are the solid colour cottons I dyed yesterday.  The dye is squeezed through and the fabric left crumpled up in a pottle to batch. 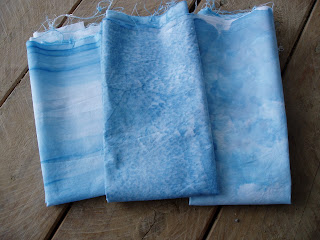 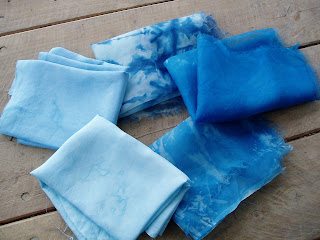 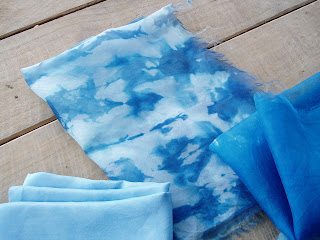 These are the silk habotai (left) and the silk organza (right).  The closeup is of my favourite piece.  It is silk organza twisted into a loose knot and then dye dripped on top.  The organzas and silks were not soda ash soaked to start with so I poured some soda ash solution over the top after maybe 20 minutes.

This morning I came out to the lounge and realised all the silk and organza pieces were missing from the clothes horse.  With some gentle persuasion, the kiddies confessed.  They loved the feel and look of them so much they had snitched them and hidden them in their pillowcases!  Fabric filtchers!
Posted by Charlotte Scott at 2:44 PM 2 comments: 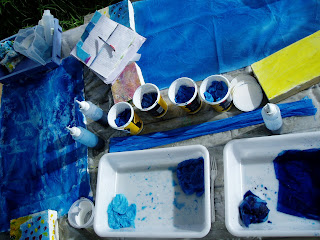 The sky was so blue today and the house peaceful (one kidlet at daycare and the other at school) that I decided to play with a few blues of my own.  I need some more 'skyish' fabrics, so I mixed up a few different blues and tried a few different effects, like pleating, salt, dye onto dry and dye onto wet.  I used a high-thread count cotton, silk organza and silk habotai fabrics and procion MX dyes.  They are now in the washing machine and I'll photograph them tomorrow, weather pending.

The pretty coloured wooden blocks were painted by my daughter and work well for holding down edges in the breeze. 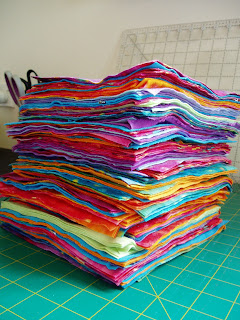 Do you remember this stack of flannelette fabrics? 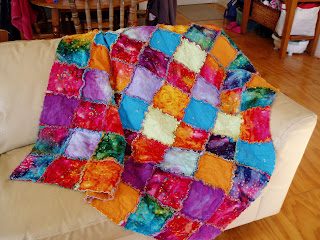 Well, a bit of mix and match, a bit of sewing and a whole lot of seam clipping later, and it becomes a snuggly quilt for the kids in front of the television on cold weekend mornings. 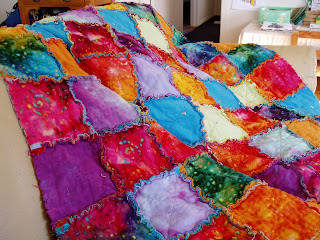 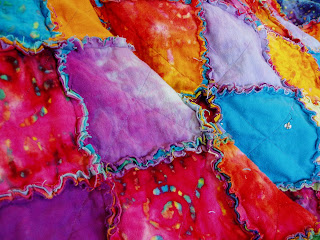 I love how the colours mix in the seams.  And I really love how much it reduced my flannelette stash!
Posted by Charlotte Scott at 6:24 PM 4 comments: 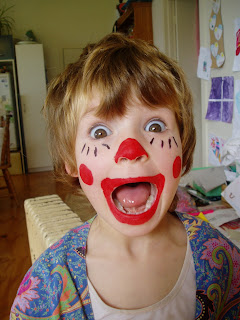 Head colds always get me down.  They sap my energy and leave me wanting to do nothing but read.  (Unlike my crazy daughter who always seems to have boundless supplies of go-go juice!).  And read is about all I've been doing lately (The Liveship Trader series by Robin Hobb if anyone is interested, sci-fi fantasy escapism at it's best).  And I'm just managing to keep the house from drowning in chaos. 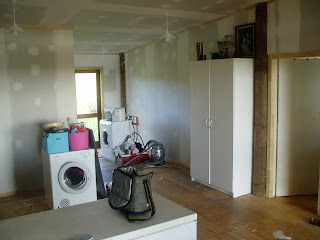 Maybe I'm languishing because I know that when I'm better I have painting to do.  Lots of painting!  I know I should be really happy that my studio is all but done, but instead I have a whiny monologue running in my head.  "It's going to take ages.  Can't we hire someone?  I don't really know how to paint a room."  Moan, moan, moan!  I need to kick myself in the butt and just get going.

And then it's ALL DONE!
Posted by Charlotte Scott at 5:25 PM 6 comments:

So I haven't burnt the dinner, overflowed the bath or left the kids behind at the shops for a while (I've never actually done the last one, just fantasised about it).  I figure I'm over my jetlag.  And I worked a night shift on Thursday night and managed to not drop any babies, even a slippery new born one!  I'm patting myself on the back.

The reason I'm supposedly jetlagged is because I flew to Brisbane and stayed for two weeks to help my brother and beautiful sister-in-law, as they were having their second child.  Their first boy is only 22 months old and they had only just moved to Australia a few months ago, so they haven't really established support networks yet.  And I had an ulterior motive - I wanted to be the first Aunty to hold the baby! 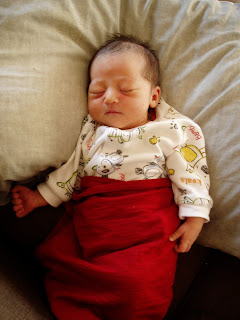 The quilt I was hurrying to finish before I left was for the new baby and I did manage to get it all done bar the label.  I'm glad I didn't do the label as they decide to swap the order of her names after the first day or two!  I used a light cotton batting as I thought they might get more use out of it that way, Brisbane is rather warm most of the year. 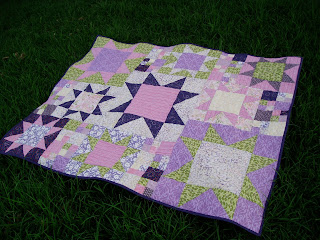 I had more of a holiday than I thought I'd get.  The toddler was almost angelic and easily amused by playing outside.  I was a bit leary of all the insects and I thought I saw a snake once, but it turned out to be a big brown lizard instead! 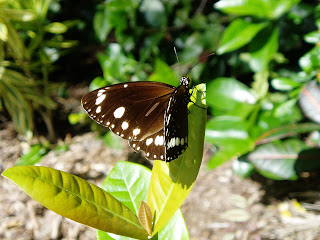 My sister flew up from Sydney for a few nights and my Dad, Stepmum and baby brother visited a couple of times - they live about an hour and half away from Brisbane.  I got to explore the local walkways and parks.  We visited Southbank where they have created an artificial beach next to the river.  It also has a great area full of fountains for kids.  I explored a few shops and ate more than a few goodies! 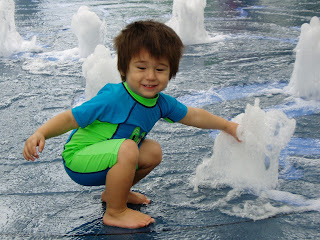 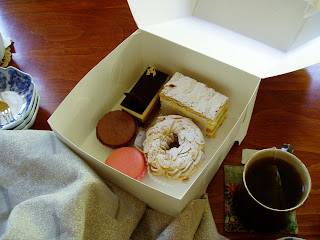 During my stay I managed to get down to Sydney for a night to see a friend.  She is a brave and beautiful young woman who is battling cancer.  It was good to share a hug.  I was really impressed with the public transport in both Brisbane and Sydney.  I was able to make my way there and back totally unaided.  Easy and efficient.

I took hand sewing in case I needed something to do and I got a bit done here and there.  I used up some paper pieced squares I had leftover from another project and sewed them up into some little pincushions.  I also hand stitched a curtain for my brother and SIL - I'm pretty good at hand sewing a blind hem now ;). 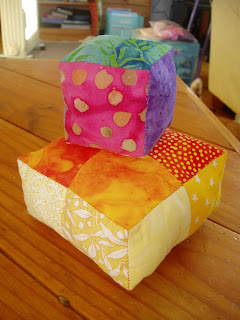 My brother even kindly took me to a quilting store, but I only bought a half metre of a red batik.  I was a little overwhelmed by the selection and had visions of not being able to stop once I started.  Then I found a place called simply 'The Fabric Store' in Fortitude Valley.  It was filled with the most beautiful silks and linens and I took away a lovely piece of indigo coloured, striped linen.  We also visited Ikea.  I've wanted to for ages to find out what it's all about, but we don't have one in NZ. Wow - what an experience!  It's huge and very cleverly set out.  I was especially impressed by their clever designs for storage.  And I couldn't resist a lovely heavy cotton fabric - I took three out of the four colour ways available!

I was glad to be heading home after two weeks.  My brother kindly woke me up at 4.30am when I missed my alarm, I had the quickest shower I've ever had and didn't miss my taxi.  Thanks bro - lucky their wee babe decided she needed a feed just at the right time!

The travel home was uneventful, just long and boring.  I was positive I was going to be in for an excess baggage charge but according to the scales I was lighter than when I left NZ.  My kids gave me the biggest hug and then demanded to know what I'd brought back for them.  Hubby was also very glad to see me - he's told me next time we'll have to get a nanny!  It's nice to be appreciated.

And to finish up, here's a pic of  what my house looked like the night I came home.  It took me about three days to get it in order.  It was an impressive mess! 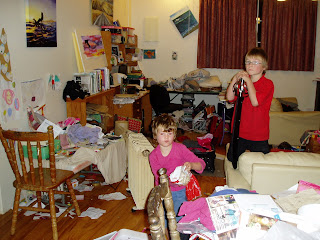 I just tried to glue-baste an applique heart with sewing machine oil.  Yesterday I left the bath running and Hubby found it about five centimetres from overflowing.  The day before that I went out for four hours and left a pot of soup simmering on the stove (it was getting dry but thankfully not smoking!)

I blaming it on jet lag.

But I only went to Brisbane in Australia, or 'hopped across the ditch' as we Kiwi's call it.

So, when I have my head a little more around being home, I'll give you all a bit more of an update.  But right now I have to go wash some sewing machine oil out of my fabric!
Posted by Charlotte Scott at 3:26 PM 8 comments: