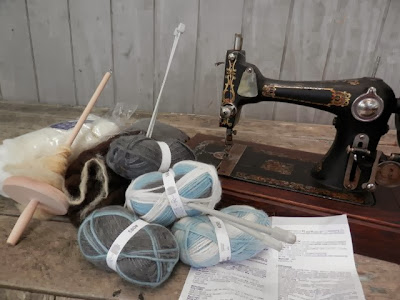 This is what I'm taking camping.  A spindle, roving, knitting needles, yarn and my hand cranked sewing machine.  And my Mother in Law is taking her spinning wheel (which she hasn't used for a looooong time and is hoping she remembers how).

We are going to have a crafty Christmas.  I want to learn how to spin and the kid have been fascinated by it too so hopefully they'll show more than a passing interest.

Then there is knitting.  I've been holding off learning because the last thing I need is a yarn stash and more WIP's.  But I can't hold off any longer, this is the year!

I'll let you know when I come back whether our experiments were successful.

Merry Christmas everyone.
Posted by Charlotte Scott at 6:00 AM 4 comments:

These are the hanks of thread I've been dyeing.

I want to eat them! 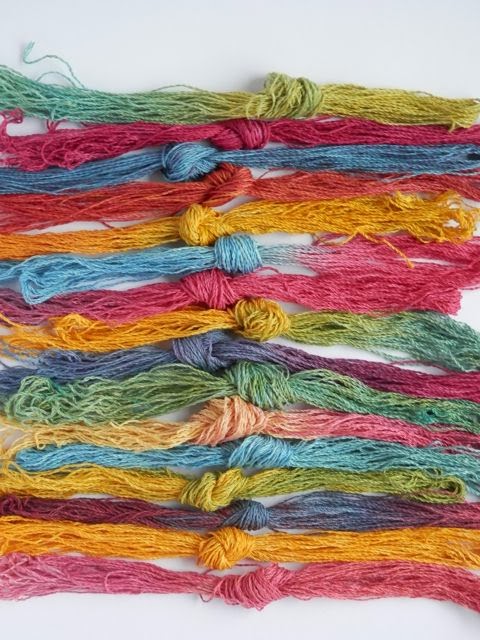 They are a beautiful silk cotton blend thread, almost the weight of perle cotton. 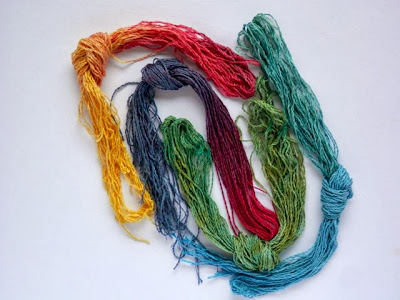 I received a huge hank because that's how they sell it and I started to wind off 10 metre lengths.  Well that lasted for about five minutes - I could see a huge tangle starting. 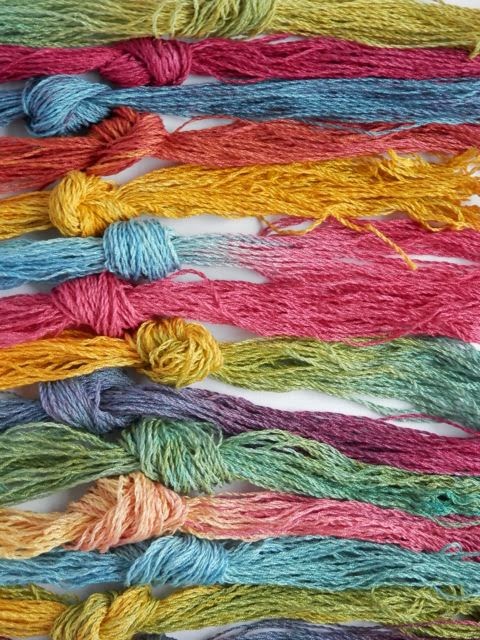 It turns out you need the proper skein winding tools for that job.  So (gasp in horror if you like) I cut the hank in half and then I can pull out 1.3 metre threads.  I take out 10 at a time and knot them into a bundle and dye them like that. 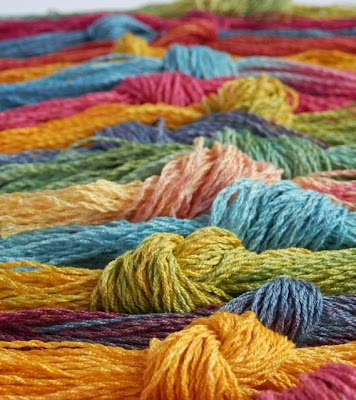 So, so beautiful.  I can't decide which is my favourite.
Posted by Charlotte Scott at 9:33 AM 3 comments:

Out my back door

The view out the back door of my studio has been captivating me lately.  Particularly in the evenings. I guess this is the first summer I've had the studio (is it?  I have no memory for dates) and the views can be absolutely gorgeous. 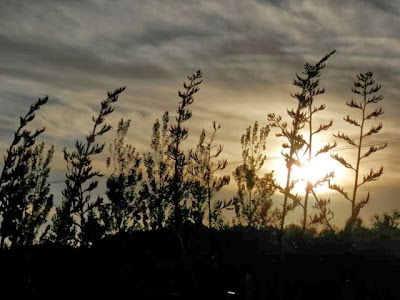 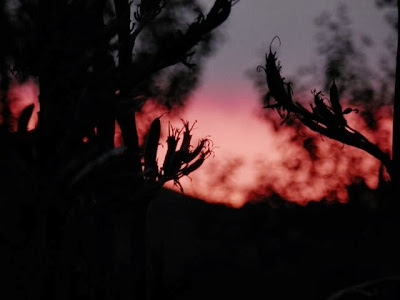 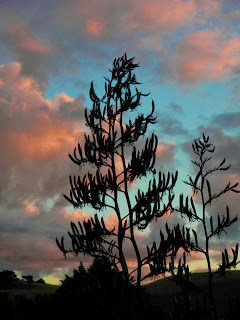 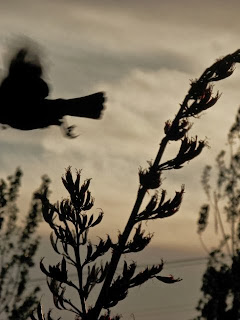 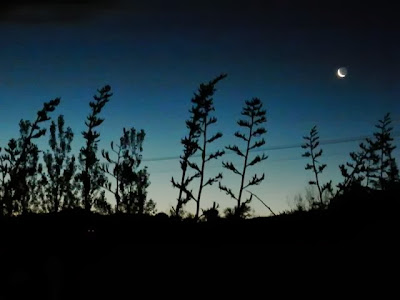 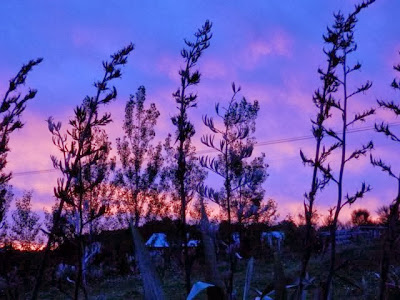 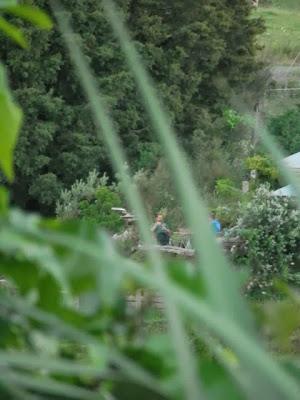 And who's that at the neighbours having a beer and a man gossip?  Watch out Hubby, I got a pretty good zoom!
Posted by Charlotte Scott at 10:00 AM 2 comments:

Stressfully squeezing in some fabric dyeing

So I managed to get the little fabric buckets (because that's what they were if you were trying to guess) finished in the nick of time for the kids to take off to school in the morning.

I had chosen the highly patterned fabric for mine, but of course that's the the one BOTH children wanted.  I got the orange hatch mark fabric in the end.

The outside is made of a heavy linen and the contrast fabric is on the bottom of the bucket as well.

Suz asked why there were three?  Because my daughter had a new graduate teacher this year and so had an older teacher helping out every week = two presents to stress me out! 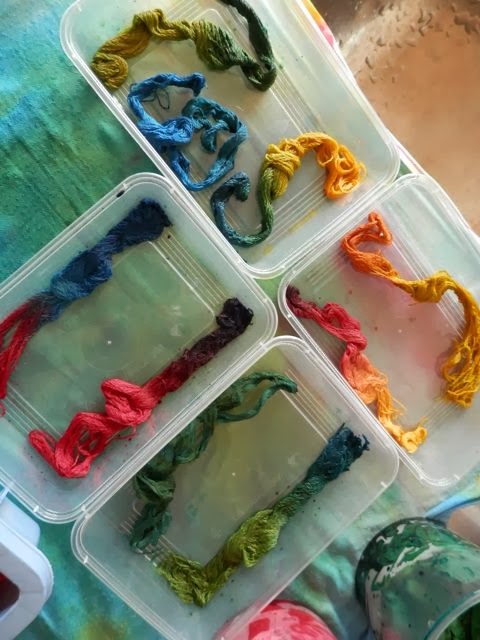 Holiday prep is kicking my butt.  That's why you got the terrible iPad photo and post the other day.  I feel like I'm a wee bit stretched.  But it's really my own making.  Why on earth I would try and fit a little bit of fabric and thread dyeing in when I have a to-do list that just squeezes onto an A4 sheet of paper, I just don't know.

But today was the first day of school holidays for the kids and I'm on annual leave for the next couple of weeks so that's making it easier.

All the presents that had overseas destinations have been organised and I'm well started on packing for our annual camping trip.

I've been a bit of a grinch and said no to a lot of Christmas functions and that's helped ease the load too.  Why do we feel the need to go to party after party after party?  I could go to at least three work related do's if I so felt the need!  But being the bosses wife, I do have to make an appearance at Hubby's work BBQ tomorrow - I'll put my non-grinch face on and fake it!

I hope to be back with a few more posts, but if I'm not Merry Christmas or happy whatever-you-happen-to-celebrate and keep it safe, people.  I want to see you all back in 2014! 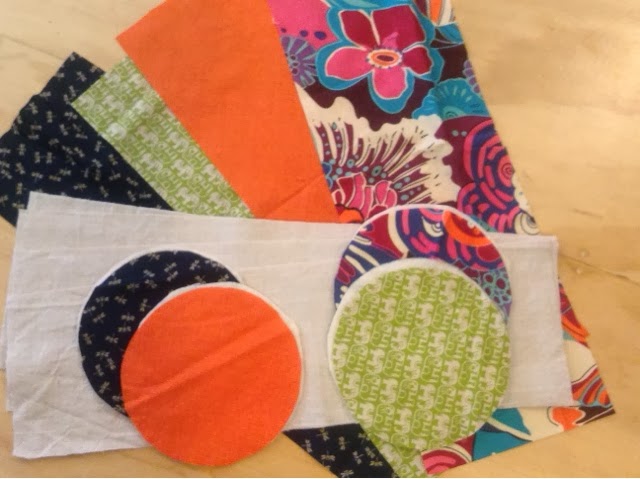 So tomorrow is the last day of school.  Can you guess what I'm doing?  It's 8pm and I'm attempting to make three teacher gifts before the morning.  The fourth fabric choice is one for me...if I'm going to all this effort then I'm blimmin' well going to make one for me too!!
Posted by Charlotte Scott at 8:05 PM 6 comments: 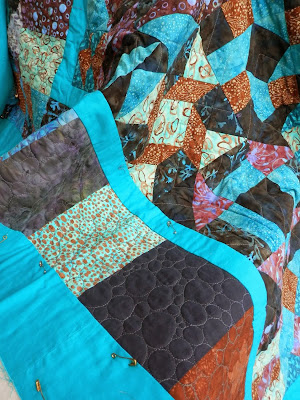 I've been spending a bit of time with quilts under my sewing machine needle lately. 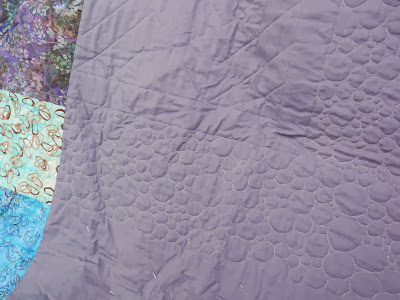 I want to get this one finished for our club exhibition in January. 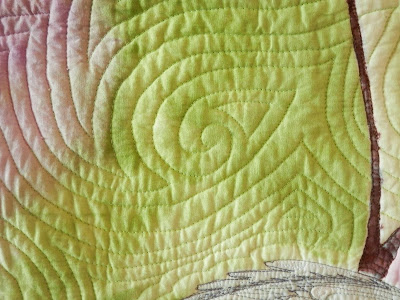 This one is done and just needs a hanging sleeve and label. 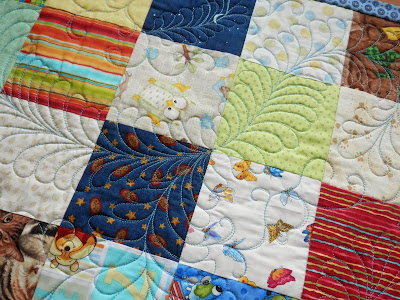 I'm binding this one ready for donation to the maternity unit. 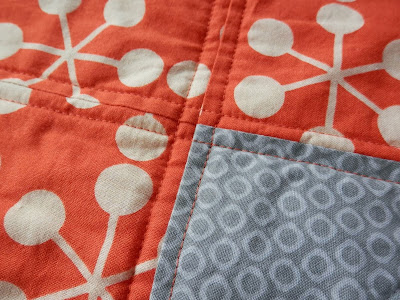 And binding this one too.  It's a table runner made as a sample for a set of beginner classes I'm going to run next year.  Know anyone who wants to learn basic patchwork and quilting in the Bay of Islands?  My email address is lottiemscott at yahoo dot com!
Posted by Charlotte Scott at 12:24 PM 3 comments:

Frogs in the Pond

It's raining today, and it rained yesterday.  Good rain, the heavy saturating sort, the sort we need.  Our water tank is full, I can hear the creek running from the house, the ducks are happy and the sheep are stoic.

I went up to check the pond when there was a little break in the weather.  I took my camera because I could hear a chorus.  And sure enough, I could see three of these guys hanging out in the water. 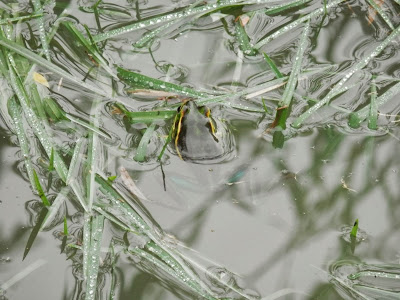 Can you see him?  He's a green or golden bell frog.  Introduced from Australia.  I'm happy to have them around - they are a good indicator as they find sprays and chemicals very toxic. 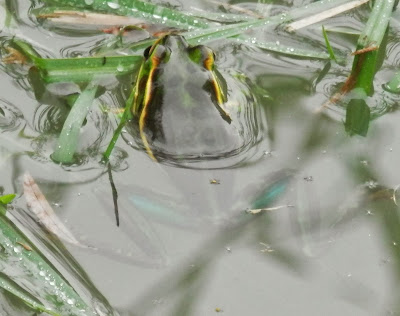 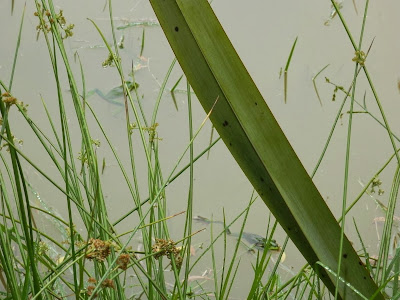 I wandered around for a bit, fed the chooks (collected MORE eggs, groan, time to give some away) and then it started to rain again.  So it's an inside day for me today - I might go quilt ;)
Posted by Charlotte Scott at 11:00 AM 2 comments: 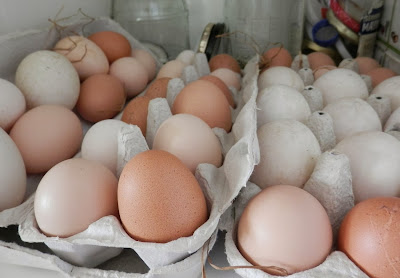 Last night I made an eggy pie that had 15 eggs in it.  Today I made a Christmas cake (my second one) that had 10 eggs in it.  I made pikelets - one egg, apple pudding - another egg and when I open the cupboard this is what I have left.  Cripes.  I'm off to boil some eggs for lunches, make an egg custard and generally just drown myself in eggs....
Posted by Charlotte Scott at 9:14 PM 4 comments: