About a year and a half ago I became an art gallery owner.  It wasn't something I'd ever wanted to be, but it was a way for me to get a studio space close to my home (boat) and form closer connections to the local art community, so I took the opportunity and jumped in wholeheartedly.

I had the use of a commercial office space while it had no tenant, but now, I'm very sad to report, my landlords have found a permanent commercial tenant.  That means that Opua Arts is no longer as of 31 October 2016.  The landlords have been great, and they wrote me the nicest notice of termination that I've ever received. 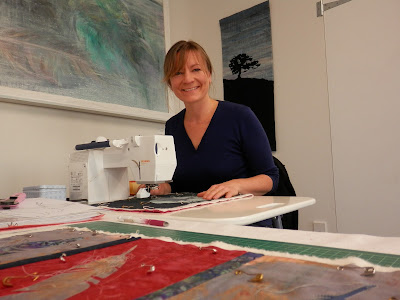 I considered making a little voodoo doll of the new tenant when I first received the news.  The thought of using the doll as a pincushion was very appealing!  And the worry about where I would work was a bit overwhelming.  But in truth, I've been expecting the news ever since I moved in.  It's a gorgeous space and Opua is an up and coming area with a new Marina expansion in progress and a general upturn of the Northland economy.

So then I got to accepting the idea.  And do you know what really made me accept it?  My electric jug died.  Isn't it weird how a little thing like that can change your perception?  My jug (or kettle if you like) was given to me when I moved into the studio and I realised I'd need to make cups of tea.  Mathea, a fellow textile artist, gave me her spare one from when she had a studio.

It started playing up right around the time I got the news.  I'd switch it on and it wouldn't go.  I'd jiggle the connections and it would come right.  It got worse and worse and it got me realising how maybe the jug was done.  And that got me thinking about how maybe I was done.  Maybe this was a sign that all good things come to an end and it was time for something new. 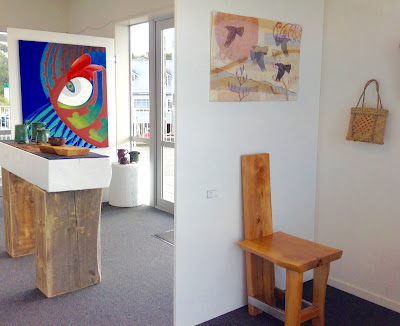 I've had fun in the studio and gallery.  I've enjoyed curating exhibitions.  I've met wonderful people at my weekly stitch and bitch sessions.  And I've learnt so, so much.  But it's time to move on.  Now that I'm over the disappointment, I'm really looking forward to having a break from the gallery work and being able to concentrate solely on my artwork.


And I've found a new studio space too!  More on that in my next post.
Posted by Charlotte Scott at 2:54 PM 9 comments:

Last week I finished running a class making my Aotearoa Tote bag.  I ran the class over two weeks, with two sessions of 3 and a half hours.  My participants were members of my local guild, so we went out for lunch afterwards - a really nice way to end an intense sewing session!


Teaching is such a great reminder of how differently our individual brains work.  My class utilises a positive/negative appliqué technique.  It generates two usable appliqués from the one cut.  It sounds simple written down, but when you have to explain it, and the students are trying to figure out colour placements as well, it can get a bit mind bending.  And for some more than others.

Our brains are just wired so uniquely and it's endlessly fascinating.  My husband can see spatial relationships in a room in a way I just can't, but colour and pattern are just not his forte.  Some experienced quilters need time and quite a few explanations to get the technique, and some beginners just intuitively understand.  I have to come up with different ways to explain it if someone doesn't understand the first way, so it's great for my brain as well.  I always learn something.

In this class, we all got there one way or another.  The participants assured me they had fun and learned something new.  What was particularly satisfying for me was that all of them tried quilting methods that put them out of their comfort zones.