Pictures of the Whangarei Quilt Exhibition

In my last blog post I said I'd give you the pictures from the Whangarei Quilt Exhibition later.  Well, here they are.  Picture heavy post! 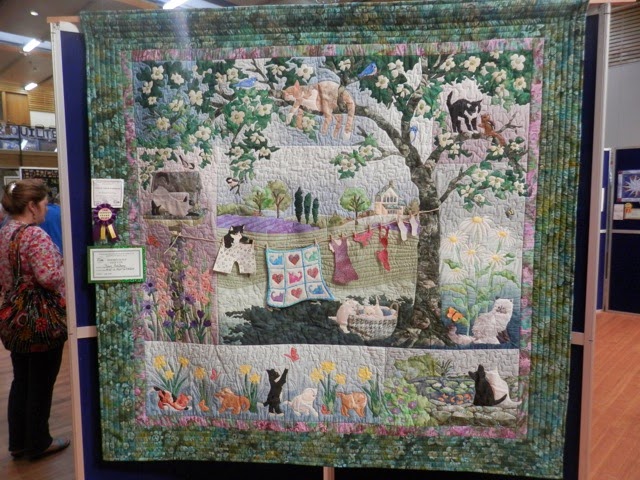 This quilt Wind in Their Whiskers by Dawn Dahlberg won Viewers Choice - Club Vote.  It's a pattern by McKenna Ryan and Dawn has very skilfully completed the appliqué.  You can see a close up of the 3D elements hanging on the clothesline in the photograph below. 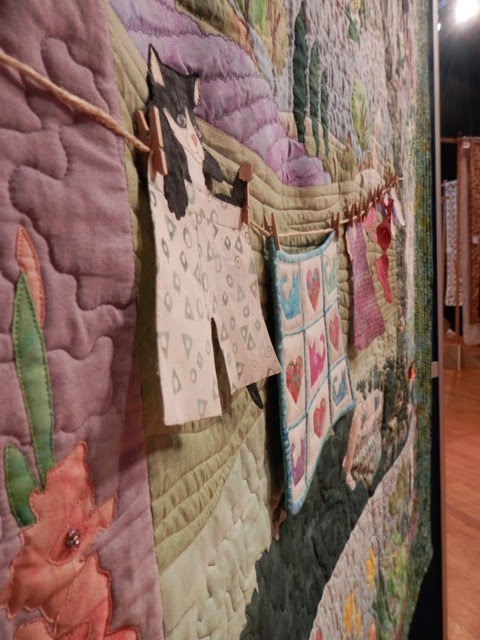 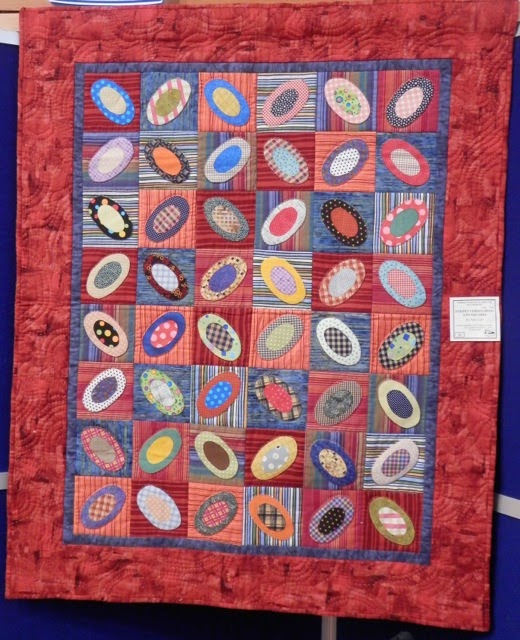 This quilt caught my eye.  A good use of striped, spotted and checked fabric.  It's named Stripes Versus Spots and Squares, and it was made and hand quilted by Pam Carr. 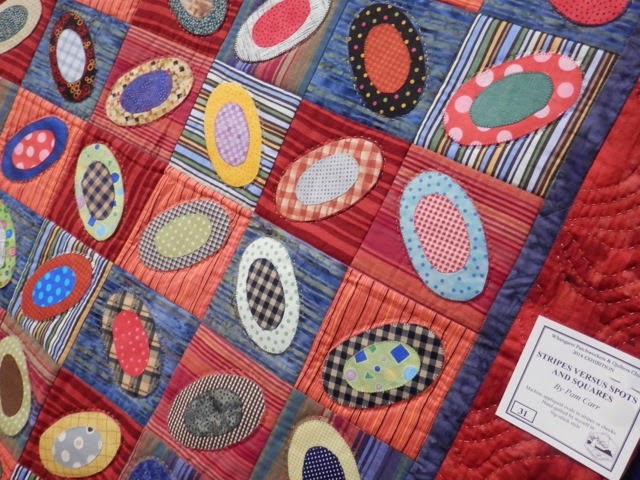 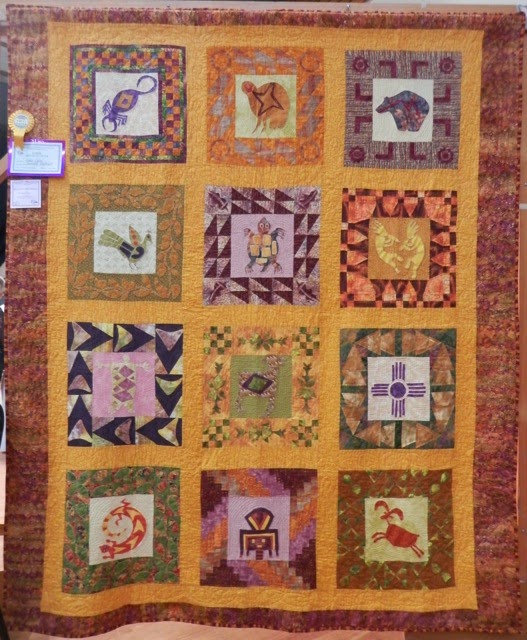 This quilt by Rikki Going won Best Use Of Colour.   Titled Succulent Southwest, it represents Rikki's memories of New Mexico. 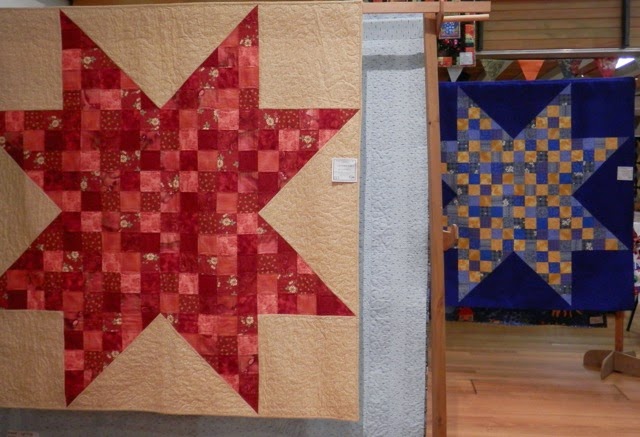 I loved the way these two quilts, both made by Leeann of Quilt Whangarei, were hung.  They really led your eye, but didn't compete by being side by side.  Leeann's favourite is is the red one. 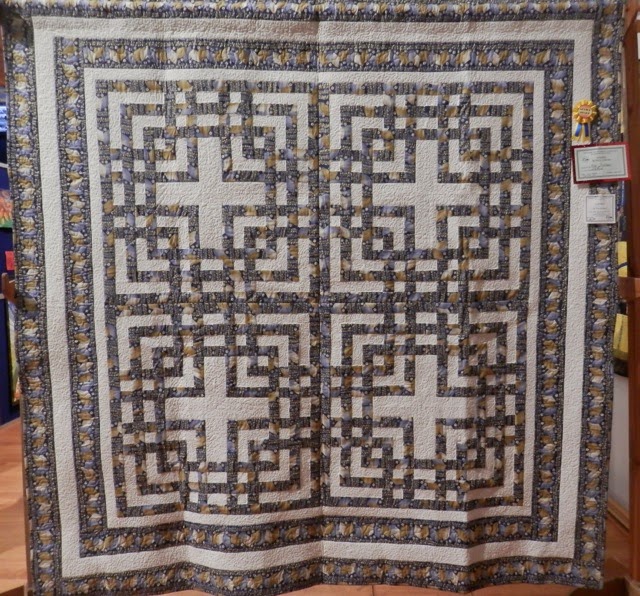 This quilt called Lattice, was made by Kim Bodman from a pattern she found in Australian Quilters Companion.  It won the Novice Quilter award. 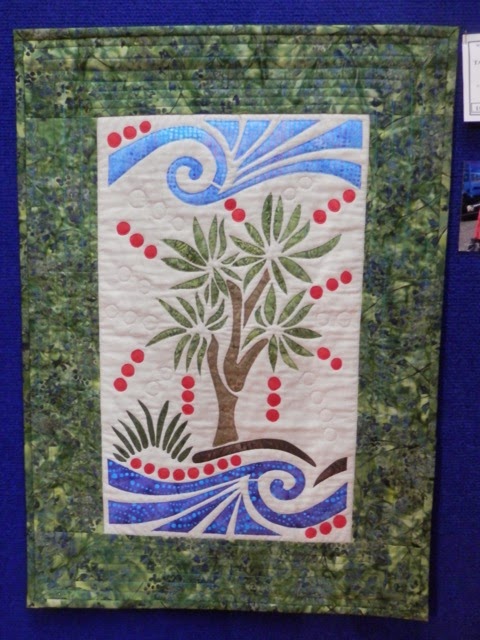 The graphic elements of this little wall hanging caught my eye.  It was inspired by a decorated rubbish bin!  It's called Taupo Cabbage Tree and is by Jane Robinson. 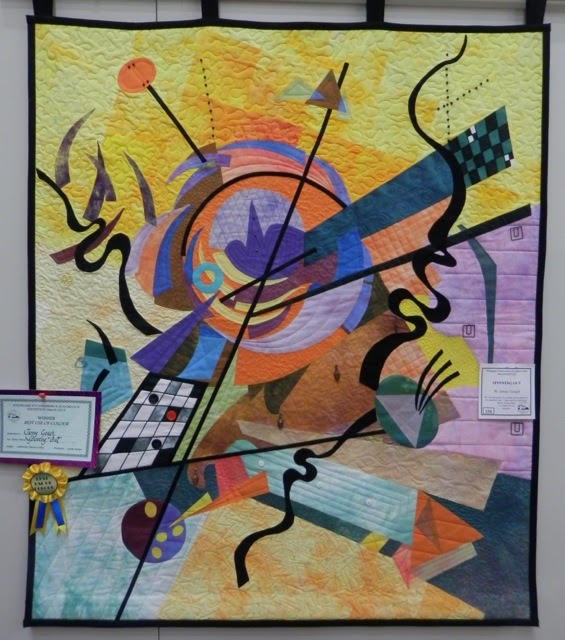 Spinning Out by Jenny Gough was inspired by a print of a painting (artist unknown) and won Best Use of Colour. 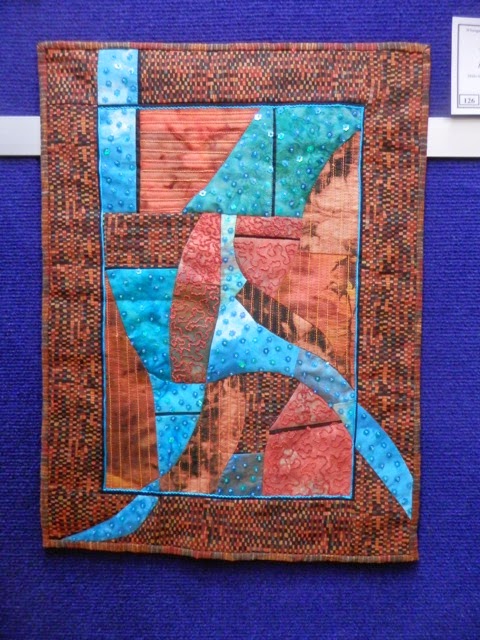 I had to take a picture of this one as I'm told it features some of my hand- dyed silk/cotton embroidery threads!  It's called The Runner by Shirley Julian and was made using a technique she learned from Dena Crain at the Taupo Symposium. 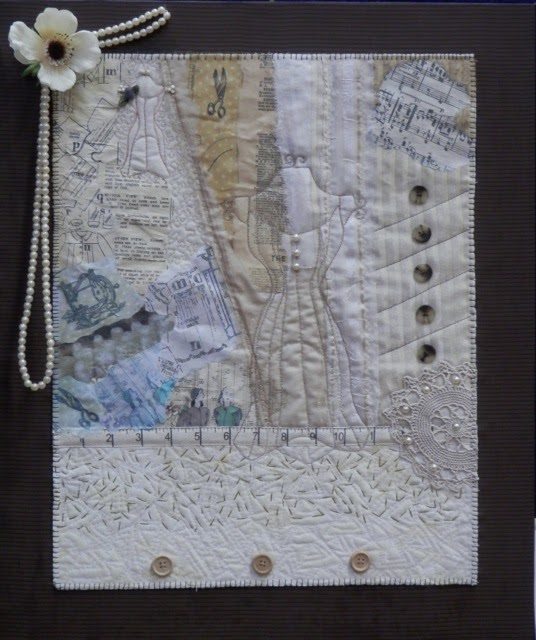 There were several quilts like the one above, all made in the same class run by Petra Pilkington.  This one is by Jenny Gough.  I liked seeing mixed media being shown. 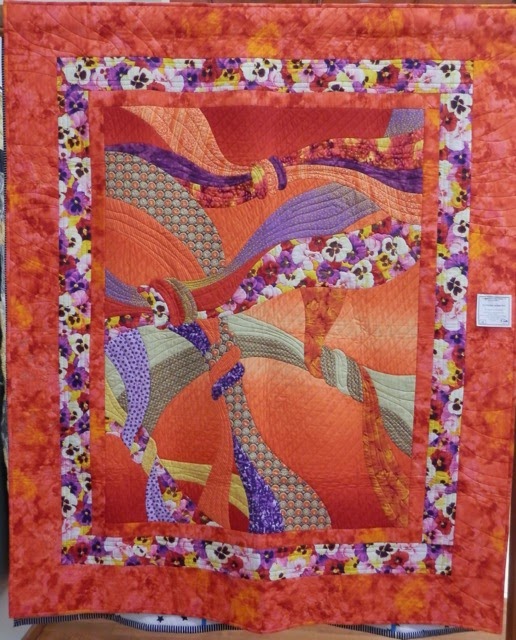 This intensely coloured and interesting quilt was another that caught my eye.  It's called Flowing Ribbons, made by Ngaire Fleming in a class by Sally Smith.  Quilted by Leonie Wihongi. 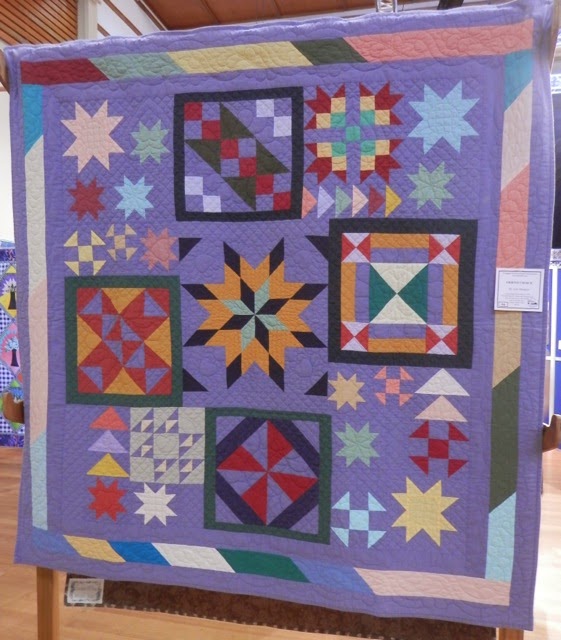 The use of only solids gave this quilt a point of difference.  Made by Lyn Madden, it's called Friend Choice. 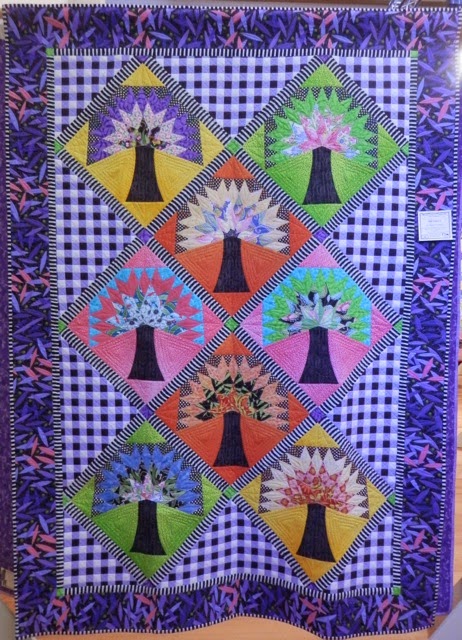 This is another by Ngaire Fleming and was started in a class by Sarah Fielke.  The quilt is called The Grove and was quilted by Leonie Wihongi. 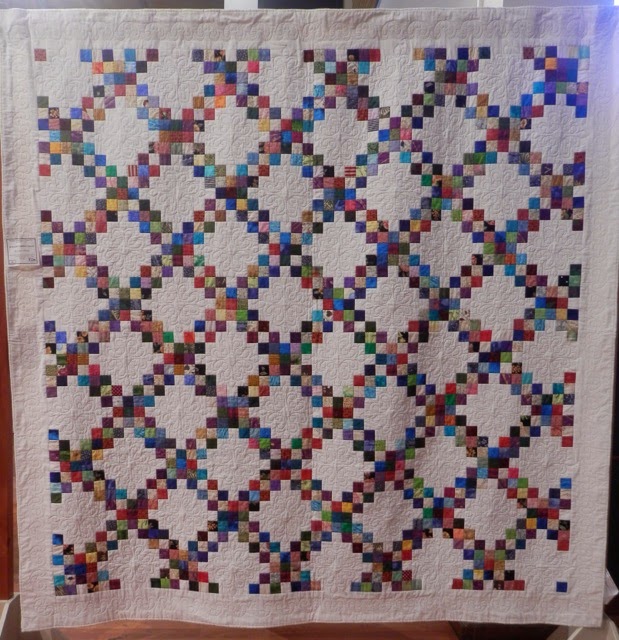 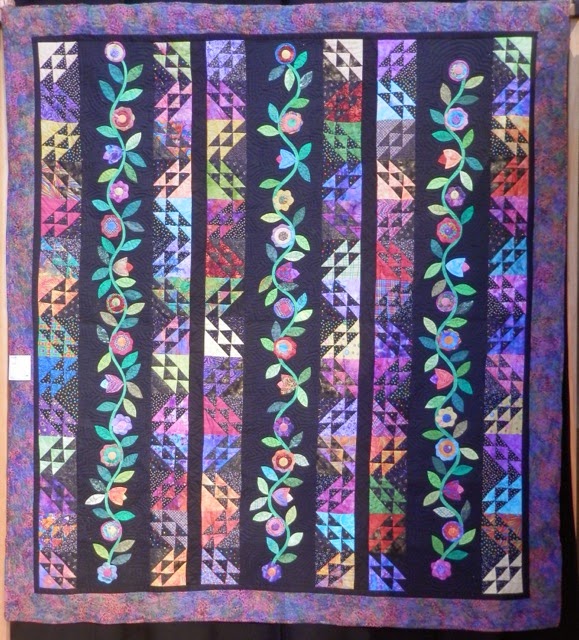 The colours are a bit funky on this photo because of the lighting, sorry.  Midnight Blooms by Jean Nutter.  Needleturn appliqué always impresses me! 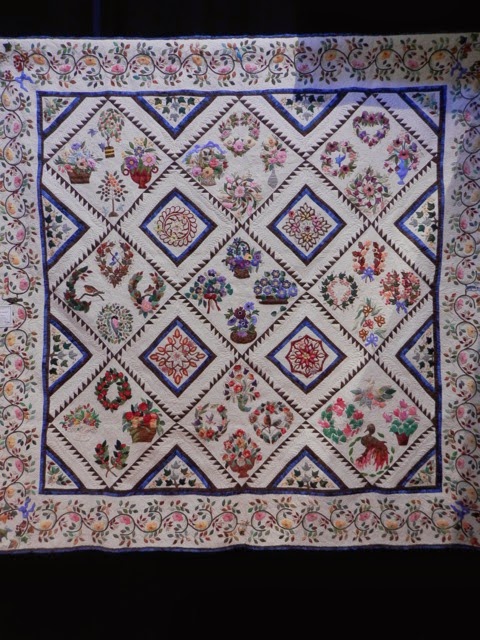 And Jean Nutter is obviously a handwork enthusiast.  This is called Rambling Roses and is a copy of a quilt called Little Brown Bird by Margaret Doherty.  Machine quilted by Jo Hollings. 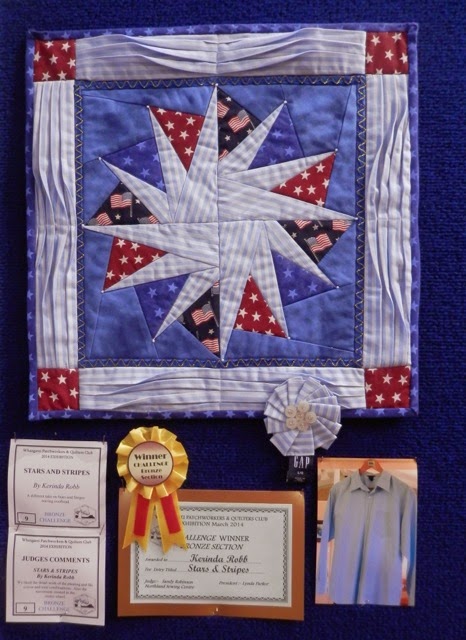 Here's two quilts from the shirt challenge.  The first is called Stars and Stripes by Kerinda Robb and won the Bronze Section. 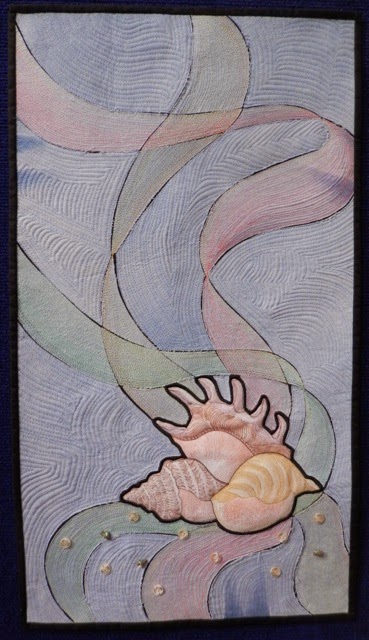 The second is called Chambrayed and is by Lynne O'Donnell. 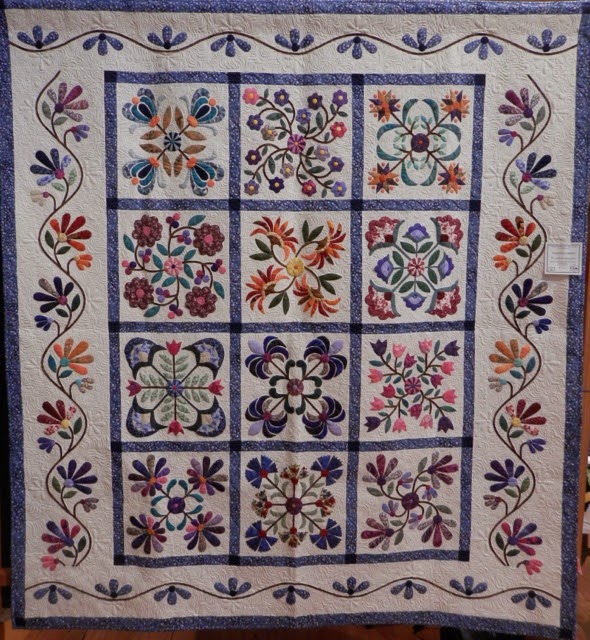 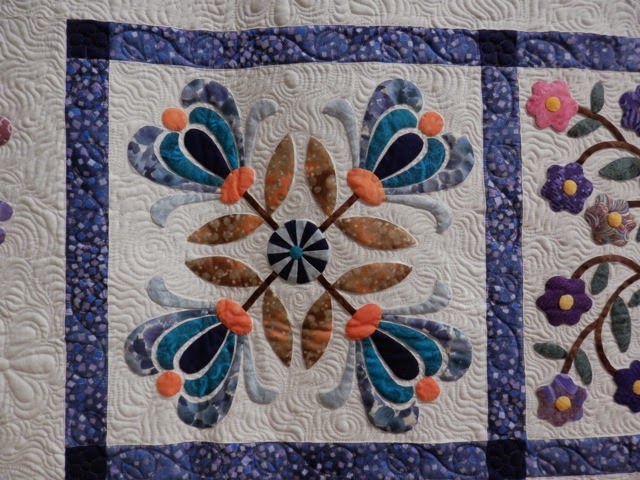 And the last picture I took is of my viewer's choice vote.  I admired the fine work in this one and it's something that I probably will never do, so I admire it all the more.  It's called Flower Garden and is made by Jeannette Monaghan and quilted by John Neilsen.

Hope you enjoyed the pics.
Posted by Charlotte Scott at 8:59 PM