We've been living off-boat/on-shore for about a year now and about nine months in this particular house.  I'm feeling well settled, in fact, it's starting to feel too small.  I'm resigned to the fact that however large a space we have to live in, we'll soon fill it, so it's probably best that we stick to fairly small abodes!

This house is only 90 square metres (970 square foot) and it only has three bedrooms and one bathroom.  It does have three metre wide decks on three sides of the house, so that has given us more 'living' space, but we knew we would be looking at expanding the house as soon as we could.

One of the reasons to extend is to give me an area to sew in.  Hubby promised a dedicated space when we moved out of the apartment and into here - it was one of my conditions for settling for a smaller place.  In the meantime, I've been squeezing into the corners:

And using the hall as my storage space:

The funny coloured square on the wall used to be a window.  It's in the process of being filled in because we've been extending the house on the other side, and eventually there will be a big floor to ceiling cupboard on this side.

We've (well, really it's been newly retired Hubby doing all the work with executive design decisions by me) filled in one of the decks on the side of the house and have created a fourth bedroom, another w.c and a new entrance way.

It was finished just enough and just in time to install my sister, brother in law and nephew who are visiting for a couple of weeks.  And now that they are just about to head home, we are gearing up for another push to get it all finished.  That means plastering the ceilings, painting, flooring, plumbing up the loo and then installing my son in the new bedroom.

Which gets me to the point of this post.  I get to takeover his old bedroom for my studio, which means I get to plan my studio layout!

This messy bedroom will be my new space. I didn't clean up, I'm sure you all know what teenage boy's rooms are like! 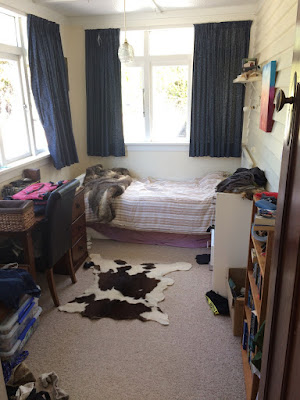 It's 2.25 metres wide and 4.2 metres long. The windows run the whole length of the front wall, so two whole walls are taken up with glass - good for light, but not great for storage solutions.  And in here, I want to fit my:
Hmmmmm, time to get planning.
Posted by Charlotte Scott at 11:12 AM