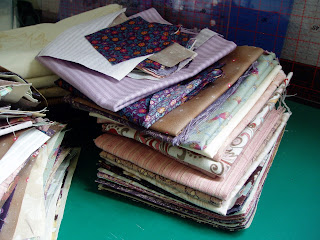 A while ago I showed you this pile of fabrics and told you that I was making a simple pieced quilt - suitable for fairly mindless quilting when I'm on night duty and have nothing to do.  So I've been nutting away at it slowly but surely and the other day I was at the stage of laying out all my finished blocks.

These will be eight inches finished.  Spot the Amish mistake block - I'll be unpicking that one, there are enough mistakes in it without a glaring one like that. 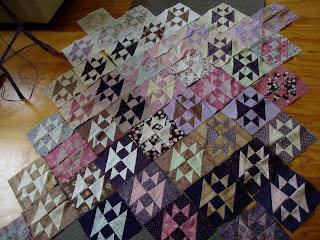 I'm really loving the colours and effect, but I've decided it's not big enough.  I've cut out and begun to piece another 15 or so blocks.  That will make it six blocks by six blocks.  With borders, that should be big enough to spread over my king-sized bed.

I'm making more dark with dark blocks and light with light blocks and that should help the colourwash-ish effect when I lay them out again.

One thing I do lack in my corner of the lounge where I sew is a large design wall.  But I find laying it on the floor is ok, especially when I take photos and look at them on the computer screen, things I want to change around become quite obvious.  I guess it's the same as taking ten steps backwards.

How do you lay out your quilts?  What do you use for a design wall if you are lucky enough to have one?
Posted by Charlotte Scott at 7:21 PM