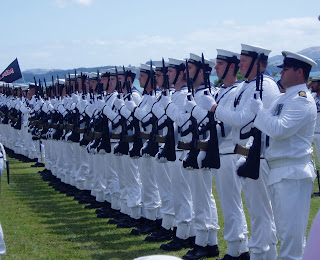 The 6th of February is Waitangi Day (pronounced why-tongue-ee), a public holiday in New Zealand.  It celebrates the day the Treaty of Waitangi was signed between the crown and (most of) the Maori tribes of NZ.  And because we live down the road, and hadn't been along for a couple of years, we decided that this year we would head along and join the fun. 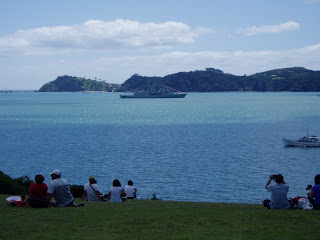 We watched the Navy brass band and the guard of honour form for the 21 gun salute (that came from the Naval frigate you can see anchored out in the bay).  We ate whitebait fritters and candy floss and drank a kawakawa soft drink.  The kids played on a bouncy castle and we all escaped to the shade of the pohutakawa trees for a while. 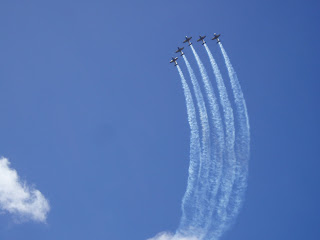 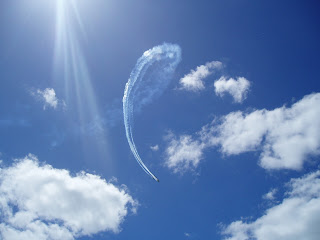 But for me, the best bit of the day was watching the Red Checkers perform an awesome aerial show.  Several times they had me gasping or clapping and the kids loved it too.  It was a great day and we were all tired and happy by the end of it. 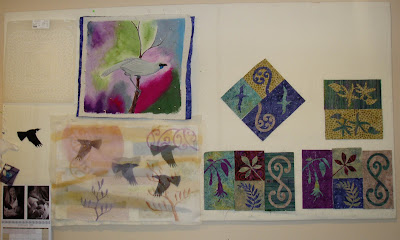 I'm thinking about doing a monthly picture of 'what's on your design wall?'.  Here's what's on mine at the beginning of February.  Lots of stuff jostling for space.  It's made me make a resolution (shock horror, I tried so hard to steer clear of them in January!).  I'm going to endeavour to finish two projects before I allow myself to start another....do you think it will work?
Posted by Charlotte Scott at 9:20 PM

Email ThisBlogThis!Share to TwitterShare to FacebookShare to Pinterest
Labels: Waitangi Day, what's on your design wall?