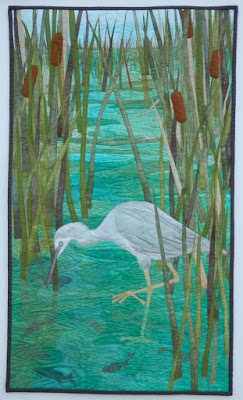 Recently I completed a quilt that was commissioned by a previous customer.  I took lots of photos during the making, and I haven’t done a quilt process post for a while, so here goes.

The client wanted a quilt the same size as the previous quilt she had purchased, portrait in orientation and featuring a white faced heron fishing amongst bulrushes (or raupo as we call it in New Zealand).

She had particularly liked the water, transparency and reflections that had been features of the first quilt so I had to take that into account.

I ran up a rough sketch for her and she was very pleased.

I began by marking off the correct finished size on a piece of light cotton lawn.  I was going to use a lot of silk organza and the white would be my base fabric so I wanted it as light-weight as possible to avoid building stiffness with too many thick layers.

When I started auditioning organza I realised I didn’t have quite the right colour – I wanted to be close to the colour of the water used in the first quilt.  So my next step was to dye some silk. 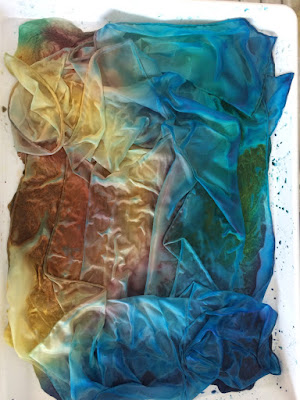 I found a piece of cotton that I had dye painted that would make perfect sky.  I used the edge of a foam brush and some fabric paint to paint background raupo. 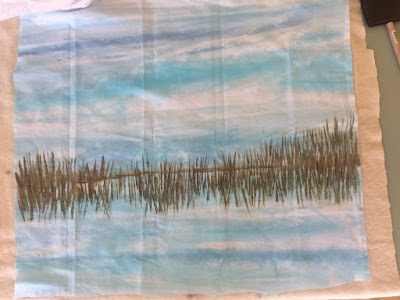 Then I began layering my silk organza pieces to get the depth I wanted in the water. 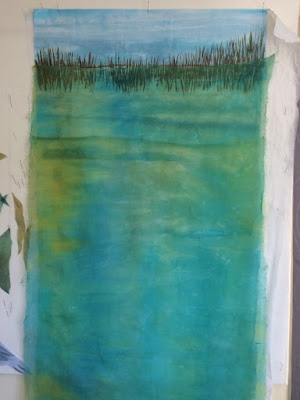 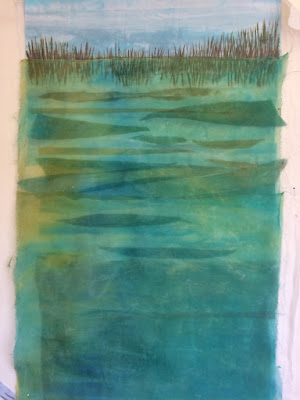 On a separate piece of white cotton, I had begun ‘building’ my heron.  I took the sketch I had made, enlarged it and used it as a pattern to fuse pieces of silk organza onto the cotton.  If you look at the photo, you can see the photocopy underneath the white cotton to help with placement of my organza pieces.   You can see I decided to lengthen the legs. 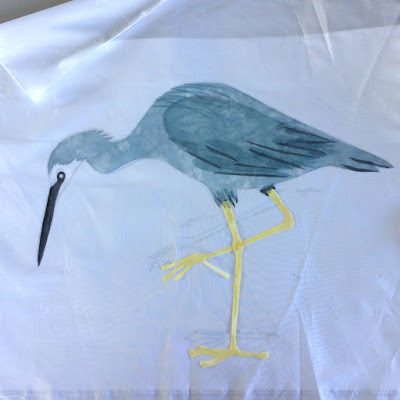 I cut him out very carefully and then I had him in one piece so I could more easily move him around the composition.  Once I had my heron correctly placed I cut into the top layer of silk organza and inserted his leg so it appeared 'under' the water. 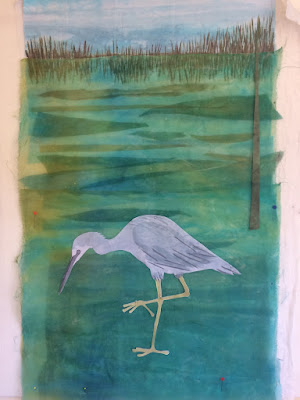 The raupo is made of hand dyed cotton mostly.  There’s a couple of strips of organza and I think if I did it again, I’d use more organza as it frays less when it’s fused down.  But it is more transparent so it would change the look a bit – there’s a question/experimentation idea that I could try and answer in my next heron quilt if I was looking to do a series! 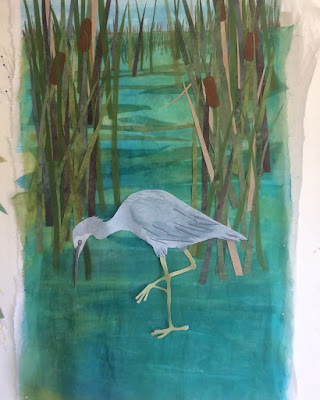 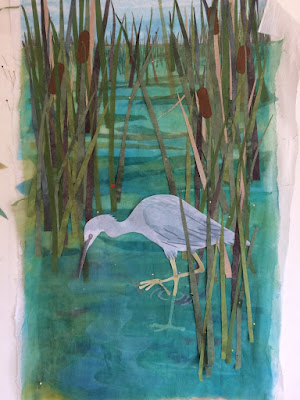 The fish took several tries to get their shapes for perspective right.  The bottom left corner could have ended up as a big ‘blank’ space that drew your eye, so I needed the fish to fill in the spot and then I arranged them in a bit of a circle to hopefully draw the viewers eye around and then back up into the quilt. 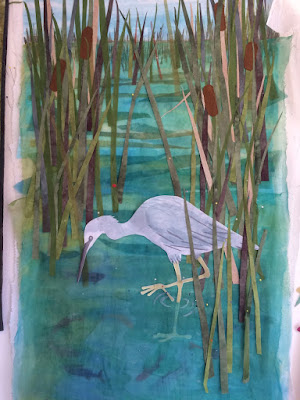 Then it was on to the quilting.  I quilted the raupo and the heron down rather than appliqueing it and then quilting it as well.  I call this quiltlique ;-) 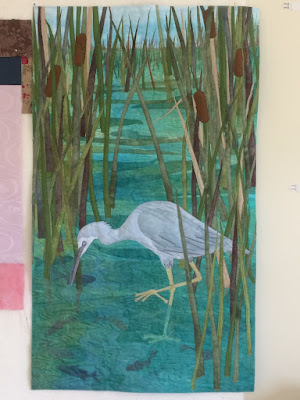 There are many different colours of thread in the water quilting.  This helps to provide texture and interest and a slight reflection of the heron and the raupo.  And then to finish it off, a binding in the same colour as the first quilt to provide cohesion.  A binding also makes it easier to control size rather than a facing. 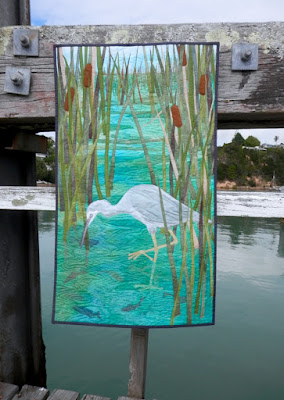 I named the finished quilt 'Early Morning Fishing'.  I was really pleased with the final result and thankfully, so was the client.  She took it home and intends to frame it the same way as she has the first, with an un-glassed natural wooden frame, and display them either side of a big window.  She has requested a sketch for a third commission….I must be doing something right!

Posted by Charlotte Scott at 8:56 PM