Most of you will have heard about the sickening attack on two Christchurch Mosque's last Friday.  It has been a sobering week since.  My first reaction was shock - that sort of thing doesn't happen in NZ!  Then anger - who the hell has the right to do that to others?  Grief - for the families, imagining myself in their shoes. And a myriad of other emotions.

Then I began doing a little more thinking and a little more reading.  One of the most popular hashtags around this event is #thisisnotwhoweare, or words similar, with the meaning that this isn't who New Zealand is, we are inclusive, we aren't racist or religionist or any other 'ist'.  Except I've come to the sad realisation that this IS New Zealand.  There is subtle and not-so-subtle racism and exclusion around us everyday.  I tend to be non-confrontational and non-engaging with it, but by doing that and not calling this behaviour out, I'm starting to wonder if I'm letting those attitudes grow and actually contributing to it?

"I have been getting more and more angry since Friday at the centering of Pakeha (White NZ Europeans) in their response to the murder of Muslims in the #christchurchterroristattack.For all those horrified at the 'off shore' white supremacy coming to NZ, please take the time to check your privilege at being able to ignore the white supremacy that exists all around us in this country.Muslims and people of colour see it everyday.NZ was colonised by White Supremacists. And the legacy of this continues in our institutions and way of life. We accept this in the casual racism, jokes, opinion pieces by prominent racists such as Mike Hosking and the abhorrent Don Brash. For how many years was 'controversial' Paul Henry at the helm of the 7 o'clock evening show? We turn a blind eye at the Duncan Garners of the breakfast and talk back shows. Please take the time to look at the pyramid below. Think about your role in turning a blind eye to the racism and white supremacy around us. Actively think about how you can be an effective ally to Muslims and people of colour in NZ. Question your #whitefragility. Why you feel defensive about this. Why you are distancing yourself from what has happened, as if it is a foreign concept in this loving country. Who is this country loving to, exactly?If you feel affronted by my words, instead of getting angry, dig deep and question why.Here are some good resources, some of which I've used to further my understanding. • Book – White Fragility: Why it's So Hard for White People to Talk About Racism by Robin DeAngelo https://bit.ly/2Hp49LV • Free workbook – Me and White Supremacy by Layla F. Saad https://www.meandwhitesupremacybook.com/book • Podcast – Good Ancestor podcast by Layla F. Saad • Instagram (and Google them for their other platforms – many may be here on Facebook) – Layla F Saad, Erika Heart, Laura O'Connel Rapira, Rachel Cargle, Sonya Renee Taylor, Glennon Doyle, Shaun King, The Aunties (Twitter), No White Saviours.

The above Instagram post by Shelly from @justonemorerow made me think very deeply about my country and myself.  And then I began to see more and more articles about casual racism, white privilege and it really began to sink in.  The saying 'white silence is violence' began to echo in my mind.

Here is the image Shelly provided with her post: 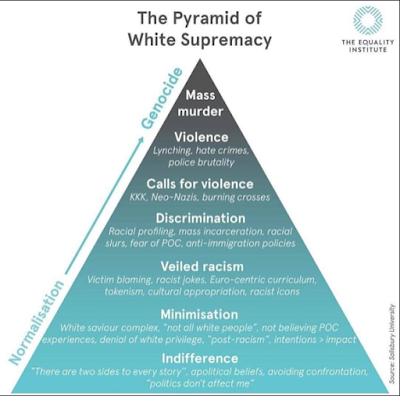 So. I intend to work my way through the resources Shelly provided and see where I end up. And I'm beginning with the 'Me and White Supremacy' workbook by Layla F. Saad.  Shelly suggests that if you use the book, the right thing to do would be to help Layla with her work by donating, and there is a link on her page to do that.

Shelly has also given me a link to a podcast by Robin DeAngelo, which is apparently very good.  It's on my to-listen-to list next time I have some quiet time and room to think.
https://www.wheelercentre.com/broadcasts/podcasts/the-wheeler-centre/robin-diangelo-white-fragility

The other issue I've been having is how to discuss these events with my children.  We have been talking a lot about how we need to be accepting of everyone no matter how different they are to us and I think that's a good start.  They also want desperately to help, to try and make things better for those affected.  So to try and lessen their feelings of helplessness, to give them something physical to do, we joined in the healing hearts program that has been started, and each of us made a heart quilt block. 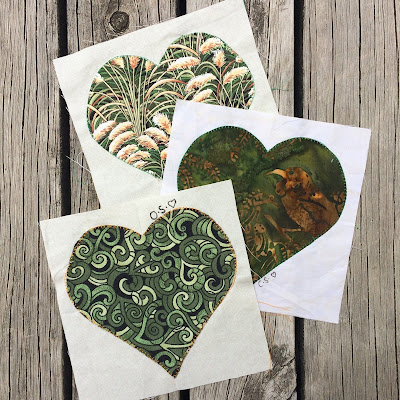 These will be put together into quilts to give to the victims and their families to show our love and support.  If you want to know more about this project and how to get involved, head to:

This is the post on the Angels in Gumboots facebook page that outlines everything and should answer any questions you have.
Posted by Charlotte Scott at 2:59 PM