It's my local quilting guild meeting tomorrow.  I'm on the committee (don't ask me how that happened) and I've organised a pincushion swap between members.  I suddenly realised I hadn't made one - not a good look if the organiser of a swap doesn't make an item to be swapped! 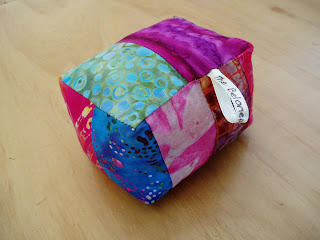 So this is my Belonephobia box (to save you a Google - it's fear of pins and needles!).  It's about four inches by 2 1/2 inches, quite large, but then you won't lose it.  It has rice in the bottom to give it weight and craft stuffing on top of that.  And it used up lots of scraps. 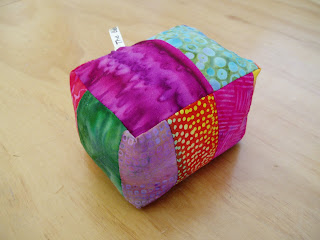 And then, of course, my little darlings saw it and both wanted one of their own.  I must tell them about 'thou shalt not covet'! 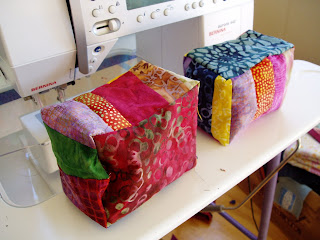 So here are two for them, just waiting to be stuffed and sewn closed.  I made them a little bigger and I don't think I'll put rice in theirs.  I have a suspicion they'll end up being thrown at each other so the less weight the better!
Posted by Charlotte Scott at 11:12 AM