My son will be six in a couple of months.  I have to show his latest drawing, I think it's just awesome.  (In case you can't tell, it's a castle!  There's a fight going on outside, you can see weapons and heads poking up above the dust cloud.  There's a couple of men falling off the top and one little chappy climbing a ladder.) 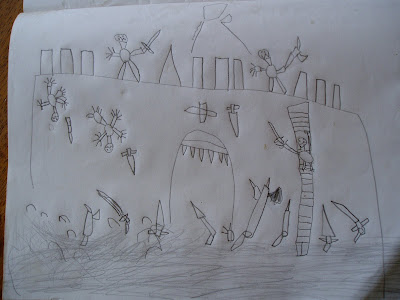 For a long time he wasn't willing to draw.  As a baby/toddler he would scribble away a bit, but wasn't really interested in paints and crayons like some kids are.  Then when he got big enough to want to draw a 'something', he refused to try - I think because he thought it wouldn't look like the 'something' he wanted it to be. 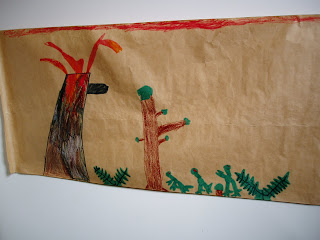 This one is a volcano, with three little velociraptors running around the trees and bushes at the bottom.
We got him over his perfectionism eventually and now he's keen as a bean to draw.  Sometimes he'll come back over and over to the same drawing adding more.  It's great to see him exercising his creativity like this.  (And it's a damn sight quieter than leaping round on the couch, hissing and roaring, being a Tyrannosaurus Rex). 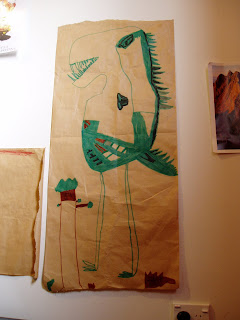 The ultimate dino any kid wants to be - T Rex!
Posted by Charlotte Scott at 12:19 PM