I had a dream last night.  A really coherent dream about leaving my daughter with a workmate of my husband in a noisy, dirty workshop while I went to work feeling very worried.  Then when I came back to pick her up I was carrying her out and I tripped over a chain, her head hit the ground as we fell.  That's when I woke up (thankfully).

So what's that all about?  Well, I've been working as a locum midwife for the last ten days and I don't think I could have a clearer indication of Mummy Guilt than that dream!

There has been little or no sewing, basic housework only, a funeral service for a dear friend and one-pot dinners.  It was a grand reminder of how easy my life usually is.  Kudos to all of you who work full time and manage kids and households as well.

Anyway.  Today I have a 75th surprise birthday party to go to.  Being so busy I haven't had time to think about a gift so I set to this morning and in half an hour I had this: 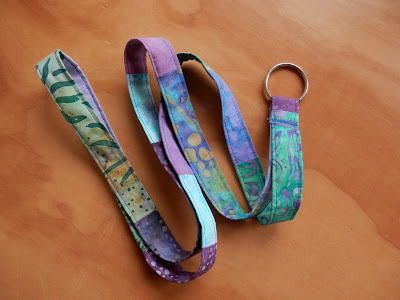 This lovely lady who is having a birthday has a tendency to leave her keys on cafe counters.  I'm hoping that a beautiful patchwork lanyard might help her keep them safe!

To make it I cut three inch fabric strips of various lengths (1 1/2 inches upwards).  I sewed them together end to end, pressed the seams open and then pressed the strip in half lengthways.  I then folded each lengthwise edge into the middle fold and pressed it again so those long raw edges were hidden in the middle (like making bag handles).  I also pressed under one short edge by half an inch.

Now here comes the only slightly tricky bit.  I threaded a keyring onto the strip, then I tucked the raw short edge into the pressed under one and pinned it to hold it.  Then I top stitched down each long edge, moving the ring along as I went.  You end up with a big ring of fabric with the little ring on it.

I found the keyring in my box of treasures but I know you can buy them at the hardware store or any place that cuts keys.  You could also put a clip onto the lanyard and you can pick them up at sewing stores or maybe the hardware store too.

I can see many more of these in my future!
Posted by Charlotte Scott at 1:24 PM