A Day of Flukes and Lessons 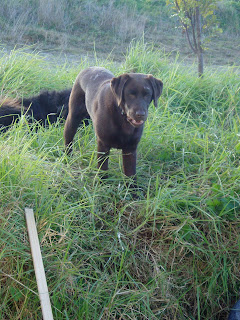 Today was a day of flukes and lessons, hopefully not harsh lessons, but we won't know probably until tomorrow.

Fluke One: The puppy found some rat bait. We don't exactly know how but we had some out at the land a while ago and we didn't use it all. We had it in an unmarked bag, on top of an old chiller. But when the builders cleared everything out of the shed, we think they just chucked it on the rubbish pile, not looking in the bag first.

Fluke Two: I saw the puppy eating the poison. I had gone outside to take Madam-almost-two to the dunny and there was Emma, the puppy, munching into her second fist-sized bag of bait. Of course I stopped her from eating the rest, but to have caught her eating it at all was lucky.

Fluke Three: My Father-in-Law was out there with us. Not a usual thing, but he was helping us paint.

Fluke Four: He had driven his own truck there, not caught a ride with my DH.

F.I.L is an ex-possumer and he still does trapping and poisoning as a bit of a sideline. He was the one who gave us the bait in the first place. He knew exactly what to do and he carries the remedy in his truck all the time. Washing soda crystals forced down Emma's throat made her heave up the bright green bait in about two seconds flat.

So now we watch and wait. The remedy is Vitamin K and to be certain, I'll get some for her tomorrow.

Posted by Charlotte Scott at 7:51 PM