One happy boy and one lively dog! 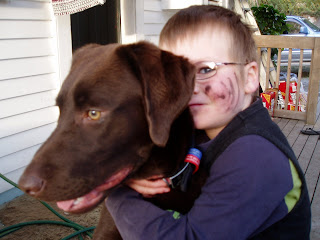 Yup, the dog is fine! Yay!! We had a phonecall from the vet the other day to say that her blood test was negative for Warfarin (which is the drug in the poison). Yay for washing soda is all I can say. She would almost certainly be dead if we hadn't been able to make her vomit it up so fast.
It's made me think a bit. Not just about keeping poisons and chemicals safe but more about using them in the first place.
I was having a chat to someone who's dog was also poisoned by brodifacoum. She never saw him eat it, or eat a dead animal that had been poisoned, and she doesn't use the bait herself. The first thing she noticed was the dog staggering, so off to the vet who knew exactly what it was. All that night the dog was fed Vitamin K and the owner was told that he was going to die. The only thing that saved him was the vet being able to find a blood donor. Then he was still very sick and needed Vit K for the next 3 months.
My thoughts are surrounding the animals we poison with it. What would it be like to die from internal haemorrhaging? I can't think it would be a pleasant way to go. I know rats and possums are major pests in our forests and I understand that in a major control operation poison might be the only real effective way. But for me at home, I think I'll be using instant kill traps from now on. Fast, effective and a bit more humane.
Oh, and the stuff on my son's face?? That's a drawn on Moko, or Maori tattoo. They were celebrating Matariki, or the Maori New Year at Daycare.
Posted by Charlotte Scott at 10:23 AM