How to joint a rabbit (chopping up dead animals - vegetarians beware)

When I searched my recipe books for a 'how to' on jointing a rabbit I came up with a blank.  Similarly, I couldn't find much on the web.  So I thought I'd do my own little tutorial, photos included.  There is a recipe for my favourite rabbit stew at the end of this, so if you want, you can flick past the fleshy bits and get to the recipe at the end. 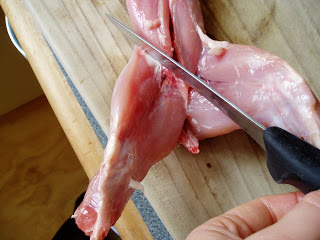 Take your rabbit carcass and lay it on it's back.  Start on the hind legs.  Bend one backwards towards your chopping board until you are dislocating the hip joint.  Cut through the flesh (a good narrow sharp knife helps a lot) where the top of the leg joins the abdomen until you reach the joint.  Carefully cut through any last cartilage holding the joint together. 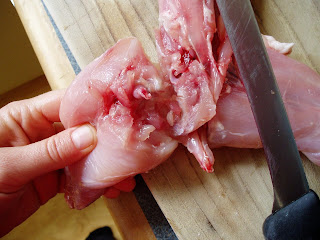 Then slice through the rest of the meat, heading down towards the tail (I'm not a professional butcher so forgive me it my meat looks a little hacked).  Do the same with the other hind leg. 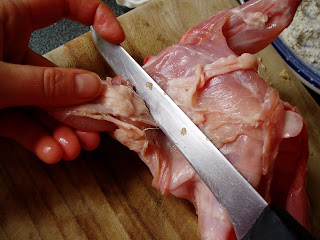 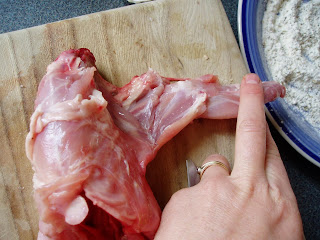 It will then slice off quite easily but you have to either slice through the itty bitty collar bone or find a joint and cut through that.  Do the same with the other side.  Then you are left with a legless body. 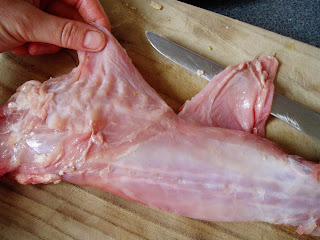 Cut through the flappy abdomen flesh heading back towards the spine and around the back of the lowest rib.  Once you reach the spine then bend the carcass in half backwards and dislocate the joints where you want to cut through and then carefully cut through.  If you can't work through a joint then get a big ol' blunt cleaver and just hack through. 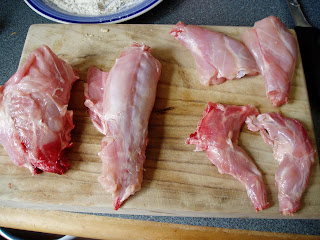 Finito!  You have six nice joints instead of a carcass that resembles a boiled baby.  Much more aesthetically pleasing.  I practiced on chickens first and adapted the instructions I had for them (thanks Alison Holst!). 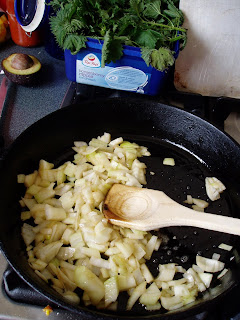 Onto the recipe.  My favourite rabbit stew.  (Those are nettles in the background NOT anything illegal!  I can post a recipe for nettle soup if you like.)
Chop an onion and fry gently in butter. Chuck into a slow cooker.  Season about half a cup of plain flour with salt and pepper and mixed herbs (dry or fresh, oregano, sage, rosemary etc). 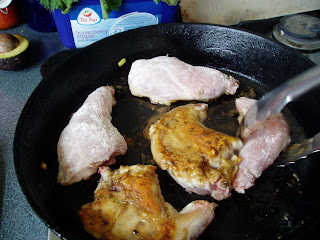 Roll rabbit joints (I used two smaller rabbits) in the flour then brown them in butter.  Layer them into the slow cooker with sultanas that you've plumped up with boiling water.    Fry some chopped carrot and chuck that in the cooker too. 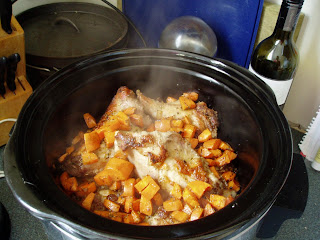 Deglaze your pan with a good splash of your favourite dark beer.  Throw that and the rest of the beer (300 ml can of Double Brown worked for me) on top of everything else in the cooker and cook for about six hours.  I stirred it once 'cause I just can't resist! 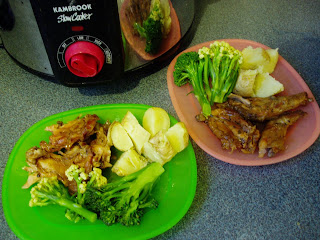 Serve it up with homegrown broccoli and cauliflower and some spud and enjoy!  Yes, even the kids ate it.
Recipe adapted from my sister-in-law's NZ Country Women's Institute Cookery Book Reprint 1964 (she even scanned the recipe and the cover for me and emailed it to me but blogger won't upload that pic for me).
Edited to add:  This is a really good video of how to joint a rabbit that I've found since writing this
http://www.youtube.com/watch?v=b8OO2vAwzQY&feature=related
Enjoy!
And I'll take pictures of the new lamb when it stands still!  (His name is Minty or Woolly depending who you talk to.)
Posted by Charlotte Scott at 10:16 AM