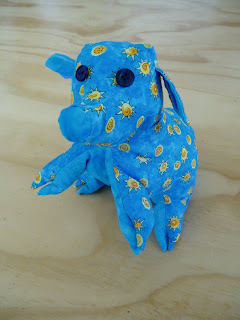 This is Piggy. Named by my two year old daughter. I started sewing him a few months ago from a soft toy book I picked up for a few dollars at one of the local Op Shops. The book was from at least the 70's and he was made in pink fake fur, but I think he looks kinda cute in blue.
This is the first soft toy I've sewn for a long time, probably the first one ever, but I won't claim that in case one of my sister's sets me straight! And I learnt a few things along the way: trotters are tricky; when they say stuff firmly they mean it; and if you intend to give the toy away, don't let your small children see you doing the final stitching.
This was going to be for my sister's birthday next month - she's tricky to give to. But now she'll have to have something else because dear daughter has claimed Piggy on no uncertain terms. And who would be so cruel as to wrest a soft toy from a little girl's arms?
Sorry, Bec, I'll think of something else! And Cat, I've made something scrummy for you and I'm resisting posting a pic of it with all my might - Happy Birthday for today!xxx
Posted by Charlotte Scott at 10:31 AM