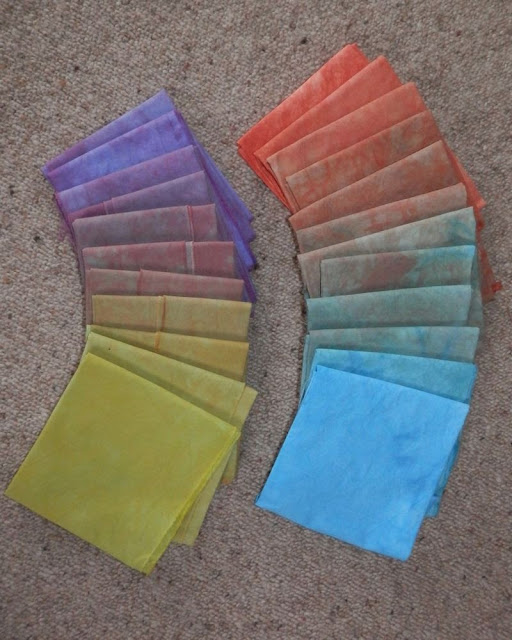 These are what I've been doing in my spare time recently - my play time!  I've been wanting to try this for a while and even just doing two has taught me lots.

These were all fat quarterish sized squares of plain white fabric.  I soaked them in a soda ash solution then wrung them out and crammed them into small plastic pottles and poured just enough dye over them to be able to squeeze it through.  It's called low-water immersion dyeing and gives quite a mottled effect. 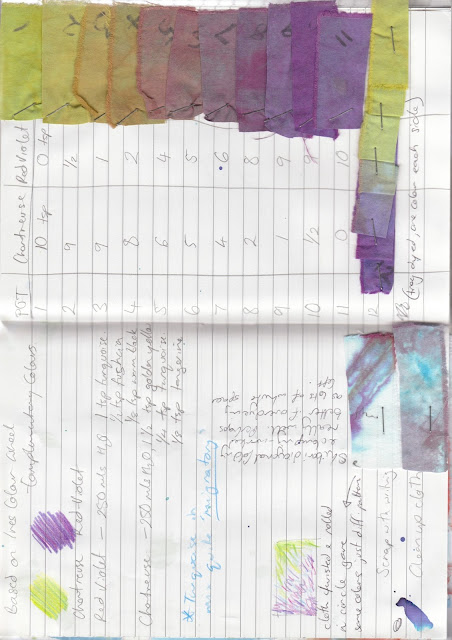 I thought I'd show you a page from my dye workbook.  It's where I keep notes of all my techniques and recipes and samples so if I want to replicate something again, I have a record of how I went about it.  I think it's really pretty looking!  However the purple and green remind me a little of my eyes.... 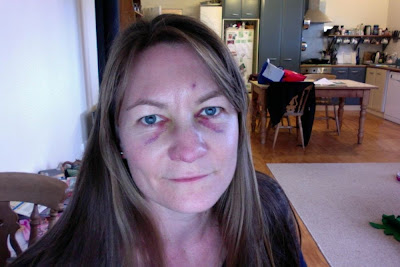 Oh yes, the bump got better but the eyes got worse.  Kinda scary looking!  (No laughing, Cat!)  I had to go to work today and lots of explaining had to be done!  I told one friend my botox went wrong ;)

Now, on to my impending changes that I hinted at.  Two major happenings - I am applying to study Art next year.  I'm comparing a couple of different courses that I'm interested in, but I'm definitely applying and I'm really excited! 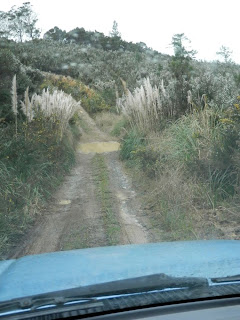 The other thing is that we are trying to buy a new house.  Except that it doesn't really qualify as a house, I reckon it's a dump.  Hubby is desperately trying to make me see it's good points.  That's part of the driveway in the pic above.  There is no way you could get down it without a four-wheel drive and I wouldn't be brave enough to drive it even then.  The pic is of the good part, the other parts I was holding on too tight!  The couple of good things about it is that it's closer to town and it's water-front with a jetty.  Can you tell I'm not as enthused about it as Hubby?  I guess I can see the potential, it's not every day that waterfront property comes along in such bad nick that we could afford it.  But the amount of work to whip it into shape is daunting!  Wish me luck!
Posted by Charlotte Scott at 5:26 PM