Back at the beginning of October, I decided to do a 'blogtober' challenge of sorts.  I planned to blog every second day during October to get me back into the habit, motivated and enthusiastic.

I should have written 15 posts.  According to my blog list, I actually wrote 12.  Not too bad.

I had 1,475 people view my posts and 37 comments on the posts themselves (and more on Facebook, when I cross-posted). 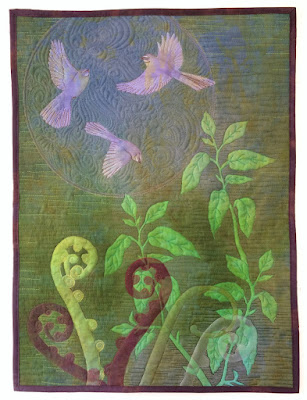 My most popular post by view was Piwakawaka in Dappled Light (that quilt sold at KOAST by the way), and the post that generated the most discussion was The Big Snip on cropping my quilt, 'Dawn Contemplation' (which so far I've taken off the binding, but not actually cut it yet.) 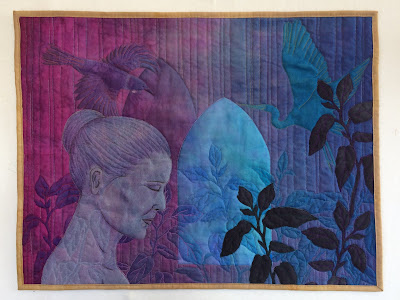 Those are the numbers, but how did I do in terms of unmeasurable stuff?

I'm definitely more enthusiastic - because after all, I need to update you on when I do finally cut up Dawn quilt, and what I do with my favourite piece of fabric!  And having a conversation and interactions with other people who love fabric and stitching is such a great motivator and inspiration.

I think I've also created more of a habit.  During Blogtober, I knew I'd made a commitment to post, so I just did.  I didn't angst over whether I had something relative to say, or whether anyone would read it, and in not angsting, it all flowed easier.

I love to blog.  I've been doing it now for years, and it's awfully interesting (and sometimes just awful) to look back over the years and have a record of what I was sewing, thinking, gardening, child rearing etc.  But sometimes it gets a bit harder than other times.  Everything in cycles I suppose.

Just for giggles, my most viewed posts ever are:

Mat and Ruler Bag, with over 6000 views.  I really should make another one and write a pattern or something.

Batting the Old Fashioned Way.  I still do this occasionally, but it does make your quilts heavy, and I seem to have run out of old woollen blankets, they are really trendy right now, with people making anything from cushions to jackets out of them.

Shibori Folding Techniques - Tutorial (hmmm, maybe I should have a shibori session when I'm next in the dye studio.)

How to joint a rabbit (chopping up dead animals - vegetarians beware,) Yes, I used to raise bunnies for meat!

Gwen Marston Class - Small Sketches (and I believe this will be much more about people searching for info on Gwen Marston, rather than because I wrote anything scintillating!)

So, to sum up.  Yes, Blogtober was a success and hopefully this has reinvigorated me for another while yet.  See you soon!

Posted by Charlotte Scott at 8:41 PM