Water, water everywhere, and lots and lots to drink.

Well the drought has well and truly broken.  We've had three days of rain.  My 25 000 litre water tank is overflowing and our dam is finally filling.

Which brings us to an urgent problem.  The dam needs fencing.  I guess it's not really a dam as we haven't dammed anything except a swale.  It's more a waterhole.  But whatever it is, when it's full it will be well over my five-year-old's head and a perfect drowning hole, being only about 30 metres from the house. 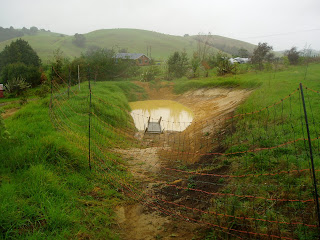 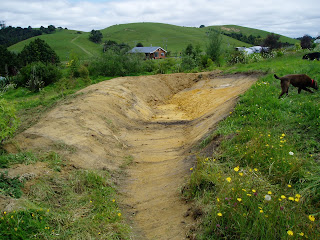 November 2009 when the waterhole was dug and now, May 2010, it's finally filling.  I have lots of planting to do around it.
We knew we'd have to fence it, of course.  We just put it off until it's desperate!  The netting you can see in the photo is Electranet and I purchased it to make a movable run for my chooks in an effort to have them more confined but still ranging on fresh grass.  The chooks haven't got to use it yet, we had to put it straight around the waterhole.  Unfortunately, my two-year-old showed us how clever she was and demonstrated to her big brother how to turn it off.  We've NEVER showed her this - the little minx picked it up all on her own.  (Never underestimate those children - they're quick!)
So, Hubby and I decided to sit down and do a budget and priority list.  You either love budgets or hate them - I hate the stark reality of them, but I do appreciate their necessity.  We listed everything we want to do out here in the immediate future (bar building the house - we would have to borrow big time for that and so far we're enjoying the shed that much, who needs a house?!) and then an estimated cost next to each one. 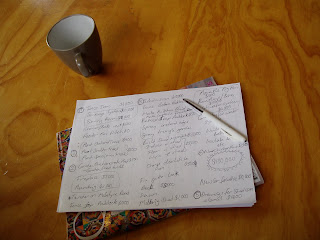 Gulp.  The grand total:  $100,000.
We have a little bit of money put aside in the bank from when I was working, we've committed ourselves to some projects already and some are must-do's and by the time we'd married all this together we knew exactly what we can afford to do over the few months.  And it certainly wasn't the whole list!

It looks like I won't be getting a milking shed or a movable pig house, or a deck or a new car.  But we will have the subdivision completed, safe children and lots of trees planted.
Posted by Charlotte Scott at 10:46 AM