So I mentioned that things had happened while I was away, and that I'd tell you about them over a few posts.  One of them was more bunnies being born, check.  Another was my flax seeds that I'd given up on ever germinating. 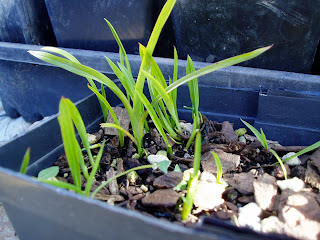 I sowed these when I picked them from their pods several months ago.  I dutifully watered them through the drought and then when nothing happened I started ignoring them. 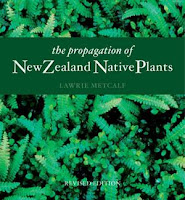 My native plant propagation bible "The Propagation of New Zealand Native Plants" by Lawrie Metcalf, says that you should sow Phormium seed when fresh and germination usually occurs within about 4 weeks.  Hmmm.  Maybe it was the drought.  But anyhoo, now that the temperature has dropped, they've all popped their heads up.  Yay.  I love flax - it attracts the tui, grows well in damp ground and is hardy as all heck. 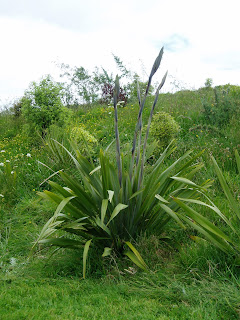 A mature flax (although they get a lot bigger) with immature flower stalks. 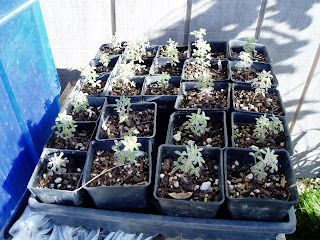 I also have more free trees.  These are transplanted Tagasaste (Tree Lucerne).  I found a little cluster growing (from seed from our shelter belt) in the bare clay where our shed extension is going to go.  I dug them up, separated them and potted them up.  And they all seem to have survived.  These trees prefer well drained soil and so don't do as well in Northland as they do in somewhere like Canterbury where I've seen them growing great guns.  But if you pick your spot right they do pretty well.  They are short lived (8-15 years), attract native birds, nitrogen fixers, flowering now (great for winter bee food), good stock fodder, good firewood and only grow to about 6 metres - very manageable. 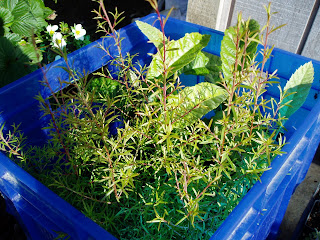 Loquats (yummmmmmmy) and Manuka.  Loquats grown from seeds and the Manuka (bee food, firewood, fast shelter) potted up from seedlings growing in my Mother-in-Law's pot plant. (Yes, those are strawberry flowers in the background - not holding out much hope for berries in winter though).

Propagating isn't as hard as I thought - if you start with the easy ones anyway.  Give it a go and if you end up with more than you need, then give them away as gifts, donate them to a school, plant them on a boring roadside.....you'll think of something!
Posted by Charlotte Scott at 3:50 PM